Slow Dancing with the Angel of Death (Spoilers!!) 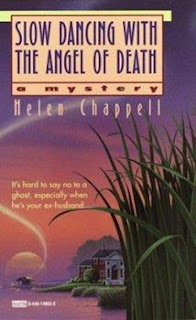 Slow Dancing with the Angel of Death (1996) by Helen Chappell

Synopsis (from the back of the book): Hollis Ball Just Received An Odd Request From Her Ex-Husband, Find The Person Who Murdered Him... When charming, wealthy Sam Wescott dies in a fatal boating accident, few mourn his untimely death. But perhaps the person most shocked to shed a tear is reporter Hollis Ball, his former wife who was abandoned by him ten years before on their honeymoon. Now he is gone.  Or is he?  For Sam's ghost brings Hollis the interesting news that his "accidental death" was really murder, and pesters her to find his killer. She would like to say now. but ever susceptible to his no-good upper-class wiles--even in their somewhat spectral form--she says yes. and plops down into the middle of a whopping big story that involves Sam's old-money family, a group of ecoactivists, and some very hot political potatoes...

I'll just be honest--this book didn't do a whole lot for me. I'm not a big fan of mixing paranormal in with anything--romance, mystery, what-have-you. The few mysteries I've read with ghosts working with the living (Aunt Dimity books; The Ghost and the Dead Deb to name a couple) have been okay...but not more than that. This one doesn't even hit okay with me. The primary reason would be because the whole premise is a fake. Sam was NOT murdered. He just wasn't. He doesn't have a legit reason to make Hollis go digging up dirt and stirring up all her rich ex-in-laws. Does Hollis find out about corruption? Sure. Are there real murders to solve later? Sure. But Hollis probably wouldn't have been involved if Sam hadn't suckered her into the whole mess by using his charm to get her to investigate his "murder." And...just maybe those other murders wouldn't have happened.  ★

First line: If you were Sam Westcott's ex-wife, you'd go to his funeral too.

Last lines: Maybe having Sam as a guardian angel wasn't such a bad idea. I could live with it.