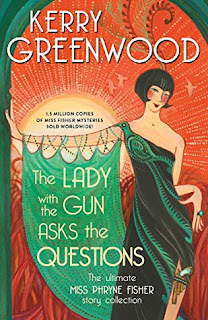 The Lady with the Gun Asks the Questions (2021) by Kerry Greenwood
This is an updated version of A Question of Death (2007)--with four additional stories and a few updates here and there on the previous adventures. It is always a delight to spend time with Phryne Fisher and I was glad to revisit the stories familiar to me (from the earlier edition which I own) and to have four new opportunities to watch Phryne in action. Some of the stories are more puzzle-oriented rather than the murder mysteries we are used to in the book-length works, but they all showcase Phryne as the independent, intelligent woman she is. I read and examined these books in tandem (since Lady with the Gun builds on A Question of Death), the earlier book is even more delightful because it includes color illustrations and recipes for drinks and food mentioned in the Phryne Fisher series. ★★★★
"Hotel Splendide": Why would the manager of an exclusive hotel give newlyweds a room that doesn't really exist and then tell the new bride that she and her (now missing) groom had never registered?
"The Voice Is Jacob's Voice": A man's punitive will results in the death of his twin sons.
"Marrying the Bookie's Daughter": The mystery of the missing bridal jewels reveals a secret that could ruin the wedding.
"The Vanishing of Jock McHale's Hat": An Archbishop asks Phryne to find a football coach's lucky hat. The reason it was stolen isn't the obvious one....
"Puttin' on the Ritz": Phryne retrieves a young man's pearly inheritance from his swine of a father.
"The Body in the Library": In a hat-tip to Dame Agatha Christie, Phryne and Inspector Robinson investigate the little matter of a deceased blonde dumped in the library of a prominent MP.
"The Miracle of St. Mungo": Phryne is on the hunt for another piece of jewelry. This time it's a locket being held by a blackmailer.
"Overheard on a Balcony": When the nasty blackmailing general dies of an overdose of digitalis there is no lack for suspects nor for those who say they did it. But was it really murder...or suicide?
"The Hours of Juana the Mad": Melbourne University's treasure, a book of hours, has gone missing and it's up to Phryne to track it down.
"Death Shall Be Dead": An old man with little money tells Inspector Robinson that someone has tried to kill him and then someone tried to buy his house. But he wasn't selling. The next day his house catches fired, there are three dead bodies in his kitchen, and he is found dead (heart attack from being tortured) on the back porch. Phryne and the inspector will need to figure out why.
"Carnival": Phryne's escort loses a valuable pearl necklace at the carnival. But all is not as it seems.
"The Camberwell Wonder": A business man disappears leaving only a bloody collar behind. One of his staff confesses to killing him, but Phryne knows that it just isn't so.
"Come, Sable Night": A man who jilted one sister in favor of the other dies of anaphylactic shock in Phryne's house. There are others in the party who also have reason to dislike him. Did he have something he was allergic to? Did a bee sting him? Or is it murder?
"The Boxer": Phryne is hunting for a missing little girl. She not only finds her but discovers what happened to her mother as well.
"A Matter of Style": Several expensive items have gone missing while their owners have been at an exclusive beauty salon. Phryne tracks them down and exacts a sweet revenge on a rather unpleasant society lady. 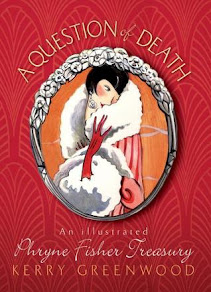 "The Chocolate Factory": A not very dose of mustard is introduced into a new chocolate manufacturer's first batch of nougats. Is it just a practical joke or sabotage?
"The Bells of St. Paul's": Phryne unravels a clever code involving church bells. (a hat-tip to The Nine Tailors by Sayers?)
First lines (1st story): "But please! You must know me! Oh, why won't you help me?"
Last line (last story): "Miss Phryne, what's wrong with the bells? They ring them every day."
[not quite the last line--I forgot to make a note of it before returning the book to the library--but a couple lines from the last story]
**********************
Deaths = 11 (one smothered; nine poisoned; one heart failure)