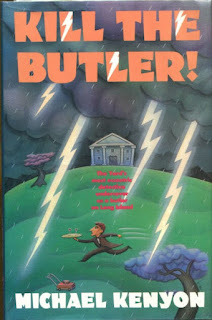 Question of the day: Is it reasonable to believe that a US Police Chief could convince Scotland Yard to loan one of their officers to go undercover and pretend to be a butler? Apparently so...at least according to Michael Kenyon. And then...we also bring another officer over to play cook when the initial one disappears.

So...Lou Langley, elderly rich guy with a lawn fixation (rich enough to have hordes of gardeners but doesn't trust anyone to cut the grass to his specifications), is killed in a hit and run accident while mowing the grass bordering his estate in Dunehampton, NY. Chief Roscoe corners Chief Inspector Henry Peckover at an international law enforcement convention and tells him his troubles in trying to locate a "green truck with a dog in the back." He's sure that someone in the Langley household has arranged for the old guy's demise--after all there is $150 million at stake. Oh...and there's also supposed to be a copy of a memo floating around. A memo from FDR proving that he knew the Japanese were going to attack and let it happen because he knew we'd never get in the war otherwise. That needs to be found pronto. Roscoe has somehow managed to convince Scotland Yard to loan out Peckover, in the guise of a proper English butler (Peckover goes to butling school for all of three days).

Enter Peckover as Jarvis, who buttles around and doesn't seem to learn much. Then Langley's sister dies and one of his major heirs, a historian with great interest in the memo, disappears. And so does the cook. A couple more people die and "Jarvis" gets hit over the head repeatedly--but just like a Timex watch, he "takes a licking and keeps on ticking." Then the hurricane hits. And, miracle of miracles, Peckover figures out who done it and why--with lots of neon pointers in the narrative but, quite honestly, very little in the way of real evidence.

Based on this outing, I'm a bit baffled as to how Peckover managed to make Chief Inspector. I mean sure, he gets his man/woman in the end, but he doesn't appear to be any great shakes at this detecting business. Credit where credit is due...he did find the missing memo. But [spoiler]

that didn't really contribute to the solution of the murders. It's doubtful that I'll pick up another in this series and I don't think it matters that I dove in midway. I just don't think the humor is my brand. I've seen praise of it out on the internet, so your mileage may vary. ★ and 1/2

First line: "The route to go is surveillance inside the house, undercover, like, say, an English butler."

Last line: [to be added]

Deaths = 5* (one hit by truck; one fell from height; one strangled; two hit on the head) *We may have lost one more, but that wasn't really clear to me...