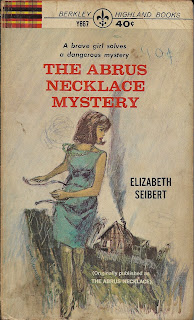 Three years ago, seventeen year-old Katy Browning's baby brother was kidnapped by a temporary nurse during the family's summer holiday in Massachusetts. The Browning family hasn't been the same since. Her mother is a shadow of her former self and currently is fighting off a bout of pneumonia. Her father has lost the twinkle in his eye and has turned into a terse, tense man. It doesn't help that there is now hostility between Mr. Browning and other "Gold Coast" home owners (those wealthy enough to have summer and winter properties) and the local inhabitants over fishing rights and right of passage through the cove.

Katy is uneasy as she heads home from her school up north. It may be the Christmas holiday, but it sure doesn't feel like they have much to celebrate. But a random memory of a red abrus necklace gives Katy reason to believe that someone from the area may be connected with her brother's kidnapping. Is it possible that after three years of fruitless searching by the family and private detectives that Katy has a real lead?

With the help of Randy Watrous, a local young man whom Katy has befriended despite the general hostilities, Katy collects more clues and despite resistance from the cove's inhabitants and without thought of personal danger she follows them where they lead. And they lead to a ramshackle tar-paper shack that's hidden on an island in the cove where danger stands between Katy and a final answer. Will Katy and Randy be able to make a happy Christmas for the Brownings after all?

This is a fine young adult mystery. It doesn't take long to figure out what happened with little Davey Browning, but there are good clues and plenty of suspenseful action to keep younger readers interested. Katy is a really good character. It's obvious that she cares about her family and only wants them all to be happy again, but she is also very compassionate towards the local inhabitants who think their livelihood is in danger and even towards the one who has had Davey all this time. I enjoyed her relationship with Randy and they way they worked together regardless of the hostilities between the adults on each side of the cover. A good, solid read. ★★★

First line: "Christmas on Cormorant Key," said Katy to herself as the silver streamliner sped through miles of Florida palms, pines, and white sand.

Last lines: Out of the paper fell a scarlet abrus-seed necklace, the black-tipped seeds glistening fiery red. Oblivious of the fact that it clashed with her suit of rosy tweed, Katy slipped it about her neck, and peered at herself in the narrow mirror between the windows, her eyes dancing.

Deaths = 2 (one natural; one car accident)