Treachery in the Yard 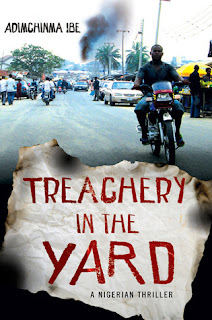 Treachery in the Yard (2010) by Adimchinma Ibe

Set in Nigeria, we find Detective Tammy (Tamunoemi) Peterside diving headfirst into murder and mayhem surrounding a general election. A bomb goes off at Prius Okpara's home--killing several of the staff, but missing the one who seems to be the target--Okpara who is seeking his party's nomination. Suspicion naturally focuses on Okpara's rival, Dr. Puene, but there are influential forces at work behind the police force and it may not be as simple as it looks. Peterside wants to find those behind the bombing, but his superiors don't want to tick off the wrong government official. But as more murders take place, Peterside finds it difficult to know who to trust--even members of the police force seem suspect. When he disobeys orders one too many times, he's removed from the case and, yet, he can't leave it alone. It may cost him his job...or even his life, but he's determined to find answers and bring the culprits to justice.

This is a little too gritty for my tastes with a lot of senseless killing. There is, however, a nicely done plot and I appreciated Peterside's dedication to the truth--no matter what the cost to himself. It was a shame he wasn't more likeable. His honesty is his selling point, but given his interactions with both, I wouldn't want to be his partner or his girlfriend. It was also nice to read a police procedural based in Nigeria--a country I know little about. Good setting and background. Solid plot offset by so-so lead character and senseless killings. ★★  and 1/2

First line: The lead officer briefed us as we walked through the chaotic scene.

Last line: "I had other people for that."