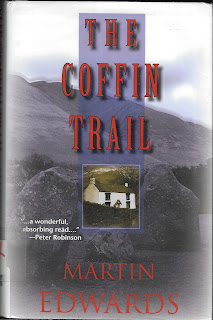 The Coffin Trail (2004) by Martin Edwards

Daniel Kind is an Oxford historian and TV personality. His new lover Miranda works as a writer for a magazine. They both have things in their pasts that they'd like to escape and when they take a holiday to Brackdale valley, an idyllic part of the Lake District that Daniel had visited last when he was a boy, Miranda falls in love with the area. They immediately put a bid down on Tarn Cottage--a cottage with a past of its own--and ditch their respective jobs to make a brand new start. But the past--both theirs and the cottage's may catch up with them.

Tarn Cottage had belonged to the Gilpins, a widowed mother and her son. When Daniel had visited the place with his family, he had made friends with Barrie Gilpin, the son. Barrie, though he was born and raised in Brackdale, was always an outsider. People in those days had never heard of autism, let alone tried to understand it, and he was just considered odd. But Daniel didn't mind Barrie's ways and accepted him for who he was.

Later a beautiful young woman who Barrie had been smitten with is found brutally murdered and Barrie disappears. His broken body is found in a deep ravine and everyone is eager to believe that Gabrielle Anders's killer has been found and sent to his reward. Daniel's father, Ben Kind (who had since left his family for another woman), was assigned to the case. Neither Daniel nor his father were ever satisfied that Barrie had been responsible.

Now, years later, Ben Kind is dead, but his then subordinate DCI Hannah Scarlett has recently been assigned to the new Lake District Cold Case Squad. Daniel's mention of the the events of years ago, stirs things up a bit in the small community and soon Hannah's squad receives an anonymous phone call:

Everyone blamed him [Barrie Gilpin], said he'd murdered her because he was a pervert. But he wasn't, he was kind, he just had problems, that's all. It was so--so unfair. What I saw...oh God, I felt so terrible when I....

But the caller refuses to say exactly what she saw that made her doubt Gilpin's guilt. Looks like the squad has their very first cold case to investigate. With both the official police force and Daniel asking questions, it isn't long before memories are stirred and it winds up that not everyone told all they knew at the time. And then another death disrupts the idyllic valley. But when the case looks to be closed one more time...is it really over?

If you like your protagonists to come with baggage and maybe a little angst, then this is a stellar opening book in a new series for Edwards. If, like me, you'd rather not do the "Daniel's relationship looks to be in trouble" and "Hannah's relationship looks to be in trouble" dance, then it's still a good, solid opening book. I'm just not that into having our key players dealing with relationship troubles while also investigating murders. And, quite frankly, if Daniel can't see that Miranda (his lady) has stick-to-it issues, he's blind as the proverbial bat.

Okay...got that out my system. How about the mystery itself? It's a good one. Edwards lays down a good plot and manages to muddy the waters nicely around the suspects other than Barrie. I did spot the murderer--but I was way off-base on the motive. I missed the clue that would have told me all--even though Edwards was obliging enough to display it not just once, but twice. Overall, this was a solid story with an interesting mystery. And I do like the characters of Daniel and Hannah. I'm looking forward to watching their storyline progress. ★★★

First line: Barrie could see the woman stretched out on top of the Sacrifice Stone.

If you wanted to win, you had to play by the rules, even if they didn't make sense. (p. 1)

Daniel groaned. The scions of the Senior Common Room loved nothing better than trashing the reputations of absent friends over tea and scones. Whenever he thought of them--which wasn't often--he not only remembered that Lewis Carroll had been an Oxford don, but also guessed what had inspired the Mad Hatter's tea party. (p. 25)

Last line: For a few seconds before he jolted back to his senses, the wandering hands belonged to Hannah Scarlett

Deaths = 9 (one stabbed; three fell from height; one hit by car; one natural; one suffocated; one drowned; one shot)