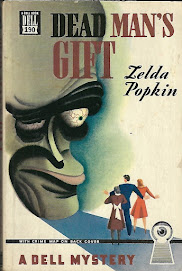 Michael Carmichael was a rich old man who died suddenly of apoplexy. He had a vast fortune from mining and big ol' house that his sister Tessie Whipple and nephew Peter fully expected to inherit. After all, they were his only family. Imagine the surprise when Eli Yarrow, Carmichael's friend and lawyer, contacts an assortment of other Carmichaels and invites them to the house for a reading of the will.

The Morning Globe assigns a reporter to do a story on Veronica Carmichael, a shop girl at a local department store who is apparently going to be an heiress. But when the journalist spots some discrepancies in the family tree, she warns Veronica that she should take somebody with her to this will-reading party. Veronica asks Mary Carner, the department store detective, to pose as her cousin and go along with her to Pitt Haven, Pennsylvania just in case there's anything fishy going on. They expect to go for the reading and head back to New York, but there's a huge rainstorm on and the Susquehanna River has other plans. Veronica, Mary, and all the other heirs wind up stranded at the old mansion--with the flood waters rising, the power and phone lines down, and a killer in their midst.

Cooped up in the house are the lawyer Eli Yarrow; Tessie and Peter; Veronica and Mary; Ruby, an ex-night club singer; Wallace, a stammering young farmer; Joseph "Joe Palooka", an ex-prizefighter; Cyril, a doctor of metaphysics who's gotten religion, and his wife Felicia; and Katie and George Gilligan, Michael's devoted servants. They all have a stake in the old man's will and they're all shocked and some are disappointed when the will is read. Tessie and Peter find that they aren't the big winners in the inheritance stakes that they thought. Tessie is "given" the clothes and jewels that she managed to get Michael to pay for over the years and Peter is given just enough to cover all his current debts. All the random Carmichaels are given $250,000 each--but only if they agree to the terms of the will. Which means they'll have to take a bunch of nasty accusations (which range from illicit relationships to murder) and like them.The Gilligans are rewarded for faithful service, but are outraged at the amount that all these strangers are going to get. Oh...and just to make it more fun...if anyone decides to forfeit their share (because, say, they refuse to be called a murderer) OR dies, then their share will be divided by the others mentioned in the will. Let's just make a tontine out of it, shall we?

It isn't long before murder raises its ugly head. Oddly enough, it's Tessie who dies--the one who has the least to contribute to the kitty. Is it really possible that someone killed her in order to get a share of her jewels and clothes? Or maybe somebody is doling outing retribution...for there's been a rumor that someone in the house (before the extra Carmichaels came along) had been trying to do the old gentleman in. Did Tessie hurry Michael into the hereafter in her eagerness for what she thought was a hefty sum? And has someone paid her back in kind? Mary is used to tracking down shoplifters in the ladies' wear, but she decides that it's up to her to do her best to find the murderer while they wait for rescue. She picks up clues, but it isn't until the group are stashed in the physics lab at the high school (after being picked up by the Coast Guard) that she gets the final pieces necessary to unravel the plot.

Just as an aside: One thing that I just couldn't get out of my head while reading...the name Gilligan. Here we are marooned in a "sea" of water and who goes swimming off in search of rescue and the police? A man named Gilligan. And...just like the TV show, it wound up being more than a three-hour tour, though not nearly as long as the poor shipwrecked crew of the Minnow.

This has a beautiful set up. We've got the closed circle murder with everyone cooped up by the flood waters. It's an interesting twist on the kooky will that punishes family members. It's definitely the first plot I've read where we have random heirs selected simply because of their last name. The opening is very good--establishing the inheritance plot, setting the scene with the flood. And the solution to how Michael really died is pretty nifty. Where this book falls down is in between. There's quite a bit of wandering around in the dark--sometimes literally, sometimes metaphorically. The sequence of events are a bit hard to follow and some of them just don't make sense to me at all. I wanted to be able to rank this higher...but I just can't quite get it to three stars and definitely not higher than that. ★★ and 3/4

Last line: "What happens now with that goofy will?"

I was so surprised to see Zelda Popkin show up in the mystery challenge! I was not aware she wrote mysteries. I have one title by her: The Journey Home which I enjoy very much. It was written in 1945 just as WWII was winding down. It is a dramatic novel of a serviceman just returning from Europe, his train journey from Miami to New York, his interactions with the other passengers, and seeing how the home front has changed since his deployment. The dust jacket (guess I didn’t read it too closely before) says she has written six mysteries and The Journey Home is her first novel. Her bio also states “she practices the housewifely arts”.

Rick: This is the only one of her mysteries that I've gotten hold of so far. I wish it had been a bit stronger.

And she is so valuable for those A-Z author reading challenges!

That cover really has a Marty Feldman vibe! Regarding your Gilligan comments, I have always maintained that "Friends" was a remake of "Gilligan's Island". The cast was recycled thusly:

And the final bit of evidence: Manhattan is an ISLAND!

Rick: Works for me!