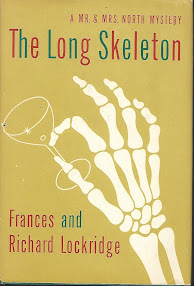 The Long Skeleton (1958) by Frances & Richard Lockridge
The Long Skeleton finds Pam and Jerry taking a hotel room to escape the painters who are redecorating their NYC apartment. They drop off their luggage and their cat, Martini, and go out for dinner and a movie only to return to their room to find something unexpected on their bed. Not a mint on the pillow--but the body of Amanda Towne, a famous television personality known for her ability to get guests on her show to reveal things they might have preferred to keep hidden. Just recently she'd managed to get a prominent judge to drop a few injudicious comments that will probably put paid to his hopes of a lieutenant governorship. But were her interview techniques enough to make someone want to murder her?
And what about our Norths? It soon becomes apparent that finding the body in their hotel room isn't the only link to our murder-magnet couple. There are suggestions that Jerry's most recent best-selling author is involved too. Or maybe the real link is to the past...a past that leads to Chicago and eventually to a suspenseful ending in the hills of Arkansas.

These books are such a delight to me. I enjoy following Pam's illogical logic and watching her make intuitive leaps are always almost, but not quite on target. It's also fun to watch Chief Inspector O'Malley chew through his cigars as he fumes over "those Norths" making everything screwy again. This one has a little more of O'Malley because Captain Bill Weigand is out of town--waiting for Washington D.C. to cough up some information on another case. And O'Malley has had more of the Norths than any Chief Inspector should have to deal with...

It doesn't matter that Pamela North just wants to help. Her quirky way of explaining everything is enough to drive a poor Chief Inspector up the wall.

Frances & Richard Lockridge created quite a duo when they came up with Pam and Jerry North. And they created mad-cap mystery perfection when they decided to drop them in the middle of suspicious circumstances in book after book. I recommend these mysteries to anyone looking for light and breezy, comic, madcap mysteries ★★★★

First Line: The sweep hand of the electric wall clock trotted downstairs to "30" and began to trot up again.

Last line: It was an odd way to describe Pamela North, Bill thought, as he walked with them to the train gate.