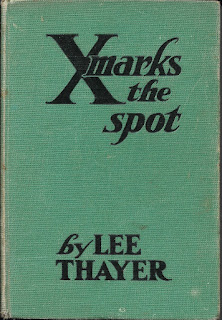 Mysterious happenings just keep happening to Dr. David Berwick and private detective Peter Clancy is always on hand to help him out. In an earlier novel, David and his twin brother Andrew ran into murder and mayhem aboard ship and Peter was a fellow passenger. This adventure begins with a kidnapping and ends with an arrest for murder.

Dr. Berwick has just recently opened his practice in the San Francisco Bay area. He hasn't much business yet, but he waits in his office each night until midnight--just in case someone will have a medical emergency. He closes up for the night, gets in his car, and sets off for home when a voice from the back seat, tells him to pull over. Two masked individuals blindfold him and force him at gunpoint to go with them to a cabin in the canyons and treat a man for a gunshot. He's returned safely to a point near his home, but they take off with his car. Surprisingly, when he reaches home, there it sits at the front curb and the next morning there is an envelope with $50 with no indication from whom. Compensation for services rendered?

David tells his brother about the odd circumstances and, since Peter Clancy is in town after just finishing up another case, Andy tells Peter and asks him to convince David to go to the police (which he seems oddly reluctant to do). But before Peter has the chance, David lands in the middle of a murder. Miss Jean Copley, who lives in a house just behind the one where David has rooms, comes running for help. Harold Worthington, her guardian and uncle by marriage, has been hurt. Actually, he's been stabbed and it doesn't look like he'll make it. Before he's taken away in an ambulance, he manages to say "Jean...Jeanie."

When Peter gets on the job he and his friend Detective Symonds discover what looks like the letters O and U--or possibly an upside-down small N--written in blood on a nearby marble step. Other clues include a barking dog, a broken pair of glasses and their missing case, a disappearing and reappearing set of surgical knives, the church clock which can't be seen from certain windows, and a locked drawer containing only a pack of cards and a green eye shade. And somehow it all connects with that opening act of what seems to be a great play. Several of the characters may have cause to want Worthington out of the way. Both Jean and her brother Christopher felt oppressed by the man's guardianship and lately Worthington's attentions to Jean have ventured outside those of an uncle. Worthington's sister-in-law, Dr. Eleanor Templeton, had had several disagreements with him and was definitely disgruntled that her sister Mary had left Worthington, her much younger husband, as guardian rather than her devoted sister Eleanor. Orin Updegraf was in debt to Worthington to the tune of $10,000--perhaps he couldn't pay up. And, despite claims to the contrary, there seems to have been a rivalry between Newton Ogilvray as professional singers/radio personalities. But are any of these motives strong enough to lead to murder? Peter with the help of his right-hand man Wiggar will have to put it all together for the grand finale.

Thayer produced just over 60 novels and all but one of them featured Peter Clancy. Clancy traveled widely to ply his trade. Even though she was fairly prolific over four decades, Thayer never became a household name--not even after appearing on the popular panel game show "What's My Line" in May 1958.

Perhaps it's because her stories, while I find them entertaining and nice to settle down with for a comfort read, aren't precisely fair to the reader--Clancy likes to keep a few cards close to his chest, somewhat like Holmes. Or because the plots are little meandering. But I personally find them fun when I don't want to read something that requires a huge attention to detail. This outing was, I think, one of her stronger outings. I spotted the few clues Clancy let us see and knew what they meant. And I also spotted the proper motive. This was perfect for this week when I spent most of my brain power on orientation week for new graduate students. And it was yards better than my last two reads. ★★★ and 1/2.

First line: High up on the hillside, facing out across San Francisco Bay and the mists that shrouded the Golden Gate, the clock in the church tower struck twelve.

Last line: "Though he'd die rather than show it, I know that he's going to be awfully disappointed and very much annoyed that, in this last crucial bit of the play, he had to be off stage."

Deaths = one stabbed; one shot; one hit by car