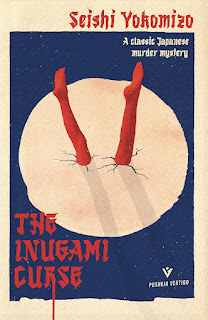 The Inugami Curse (1972) by Seishi Yokomizo

Sahei Inugami led a complicated life--rags to riches story, three known mistresses resulting in three children and grandchildren, a few secret relationships, and a bombshell last will and testament just waiting to explode as soon as he dies. When he does, the Inugami clan is in for a bit of a shock. First up, the lawyer can't even read the will until his last grandson Kiyo returns from the war OR one year from Sahei's death, whichever comes first. Kiyo does arrive after after a short delay (though hidden behind a mask because he was horribly disfigured in the war) and the family is outraged to discover that the entire estate has been left to Tamayo Nonomiya, the granddaughter of Sahei's beloved mentor, Daini Nomoiya. But it's not even that simple. Tamayo will only inherit if she chooses one of Sahei's three grandsons as a husband OR if all three turn her down (and why would they--after all, granddad's fortune is at stake). The will goes on to list all kinds of contingencies in case Tamayo dies and the gist of it all is--there's probably going to be family infighting, at best, and murder, at worst.

One of the junior lawyers in the practice handling Inugami's affairs, had a good idea that murder would be on the agenda and contacted renowned private investigator Kosuke Kindaichi. The two arrange to meet at hotel near the Inugami estate, but the man falls victim to poison before he can discuss any details of his fears. And then when the heirs start dying one by one, it's up to Kindaichi and the local police to discover the identity of the murderer. The first thing they must determine--is s/he an heir looking to scoop the pot or is there a darker plan of revenge for actions of long ago? And who is the mysterious repatriated soldier who lurks about with his face covered by a muffler?

This is one of the best Japanese mysteries I've read. It may be because it is obviously following in the tradition of Golden Age crime novels. It may also be that the translation is superior to nearly all I've read in the past. Yokomizo does a superb job of providing suspects and clues. And while I spotted the killer straight away, there remained plenty of details which were a mystery and the characters do their best to muddy the waters. There were motivating factors behind the actions of some of the players that were difficult to discern and gave the explanation at the end more zest than I was anticipating. And, as grim as the murders were, there was a great sense of fun throughout. I think Yokomizo enjoyed himself immensely in concocting and relating this intricately plotted mystery. Are there coincidences? Sure. Are a few items a bit obvious? Sure. But it was still a delight to watch the unraveling of the plot by a very interesting detective. ★★★★

First line: In February 194_, Sahei Inugami--one of the leading businessmen of the Shinshu region, the founder of the Inugami Group, and the so-called Silk King of Japan--died at his lakeside villa in Nau at the venerable age of eight-one.

Last line: It was a twilight so cold even the snow lay frozen over Lake Nasu.

I am going to keep an eye out for this one!

Thanks for sharing this review with the Historical Fiction Reading Challenge