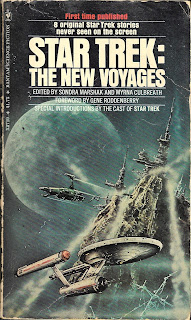 During the lean years between the cancellation of the original series and the release of Star Trek: The Motion Picture, the fans kept Star Trek alive. Through fanzines and fan fiction; through the early conventions and cosplay. Marshak and Culbreath were part of those early years and they gathered together two collections of fan written new fiction about our favorite science fiction characters. These stories were some of the first that I read as a newly minted Trek fan. My first Star Trek books were a set of five or six of the first Pocket Book ST novels and I quickly moved on from those to search out all the Trek I could find in book form (not to mention gluing myself to the TV when the episodes came on in syndication). These short stories were like manna from heaven for a girl hungry for more Trek and I loved them. Rereading them forty-ish years later, I still find them to be pretty darn good stories even though a few of them recycle tropes from episodes and some are clearly wish-fulfillment. But they do so in fresh, inventive ways--particularly in the context of when they were written. "Mind-Sifter" is easily the best of the collection. It's also delightful to read the introductions by the various Star Trek actors. I gave this ★★★★ before and see no reason to change the rating now.

"Ni Var" by Claire Gabriel: Like his captain before him (in "The Enemy Within" season 1, episode 5), Spock finds himself divided into two separate beings: one all human and one all Vulcan. Getting these two back together may be more difficult than rejoining Kirk's good and evil.

"Intersection Point" by Juanita Coulson: The Enterprise has a collision...with nothing (apparently). They soon discover that the "nothing" is another dimension and contact with it will destroy everything. An important piece of the Enterprise has been sucked into the "nothing" and someone will have to go get it.

"The Enchanted Pool" by Marcia Ericson: The Enterprise is sent to retrieve a shuttlecraft from the U.S.S Yorktown that is carrying a new top-secret weapon (code name "Excalibur") before a group of renegade Andorians can get their hands on it. The last trace of the craft shows it headed towards the planet Mevinna and Spock and a shuttlecraft team are sent to investigate.

"Visit to a Weird Planet Revisited" by Ruth Berman: A fun read wherein Shatner, Nimoy, and Kelley are somehow (no explanation given) transported to the real Enterprise while filming an episode of Star Trek. The story revolves around them making brief efforts to fill the shoes of Kirk, Spock, and McCoy while Scotty figures out how to get everyone back where they belong. [a companion story to an earlier one which showed events in Hollywood with our Enterprise trio]

"The Face on the Barroom Floor" by Eleanor Arnason & Ruth Berman: Kirk decides to go incognito while on shore leave. His adventures include buying (and wearing) a bizarre pseudo-samurai outfit, playing darts, a barroom brawl, and a stint in jail as "Harry, a junior officer from the Deneb Queen"--all while Spock & co. are trying to find their wandering captain so they can respond to a distress call.

"The Hunting" by Doris Beetam: This time McCoy joins Spock on shore leave only to find himself supporting the Vulcan in an odd hunting party to fulfill a Vulcan coming-of-age ritual.

"The Winged Dreamers" by Jennifer Guttridge: Another take on Kirk and Spock rescuing most of the crew from a "Paradise" that will ensnare them.

"Mind-Sifter" by Shirley S. Maiewski: After being captured by Klingons and subjected to the tortures of their mind-sifter, Kirk is marooned (through the Guardian of Forever) in 1950s Earth. His state after the torture results in him being admitted to a mental facility. Spock and the crew must figure out where their captain is and rescue him...

"Sonnet from the Vulcan: Omicron Ceti Three" by Shirley Meech: A lovely poem from a certain Vulcan to the girl he left behind in "This Side of Paradise."

First line (1st story): Captain's log. Star date6834.5. En route to R & R on Starbase Ten, the Enterprise has been ordered to divert briefly to Fornax II in order to pick up and transport to Starbase Ten a sealed tape.

Last line (last poem): I said I had no feelings. And I lied.