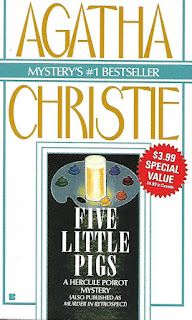 Sixteen years ago Carla Crale's mother Caroline was tried and convicted of the murder of her husband, the artist Amyas Crale. She allegedly doctored his afternoon beer with spotted hemlock after being told that Amyas planned to divorce her so he could marry the much younger woman who has been sitting for his latest painting. Amyas had fooled around before, but he had always returned to his devoted wife. They often fought like cats and dogs, but they always came back together. But this last fling was different. It wasn't just a flirtation or a bit of lust. Amyas fell head over heels and said he really planned to leave the marriage.

Various guests at the house overheard Caroline threaten that she'd sooner kill her husband than let him leave her. So, when he's found dead--poisoned from a bottle found among Caroline's things--his wife becomes suspect number one. Well...the only suspect really. Despite her protest of innocence and a declaration that he must have taken the stuff himself, her trial didn't go well at all. Her counsel did the best he could for her, but as we later learn, she didn't really help him put up a fight. What she did do was leave a letter for her daughter that was to be opened when Carla turned twenty-one. A letter that told her daughter that she was innocent in no uncertain terms. Carla takes the letter and her belief that her mother would never lie to her--no matter how unpalatable the truth may be--to Hercule Poirot and asks him reinvestigate the case and tell her once and for all if her mother was really innocent. Poirot won't promise that innocence will be the outcome, but the more interviews he has with the five other people on the spot at the time the more convinced he becomes that someone may have gotten away with the perfect (until now) murder.

So...I finished this about three days ago and planned to write the review in my spare time while I was at my mom & dad's. But unexpected events threw a wrench into that little plan and now all my brilliant observations (trust me--they were the most scintillating bits of reviews I've had going in a long time) have vanished under the anxiety of a car emergency 150 miles away from home. We'll see what I can salvage. First off, while I have watched the David Suchet adaptation of this novel, I don't remember ever having read it before. My Goodreads record tells me I did--sometime in the mists of time--but I'm not sure I believe it. I think I may have chosen the wrong tag when I loaded the book. 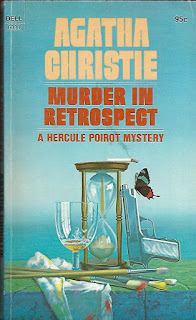 This reading was excellent. I enjoyed the retrospective quality of the book with Poirot investigating a cold-case murder. He must really rely on his interview skills and the psychology of those involved to help him get to the truth of the matter. He always says that these things plus his little grey cells is all that is necessary to solve a mystery and this case allows us to see how well this works for him. There are little clues that Christie hides so well that anyone encountering the story for the first time can easily miss them. I remembered how the filmed version played out--but I wasn't sure if this would be a situation where the filmed version changed up motives or even culprits, as sometimes happens. I was pleased to see everything work out the way I expected it to. One of Christie's best. ★★★★ and 1/2.

First line: Hercule Poirot looked with interest and appreciation at the young woman who was being ushered into the room.

Last line: Lady Dittisham got in and the chauffeur wrapped the fur rug around her knees.

Deaths = 2 (one poisoned; one natural)