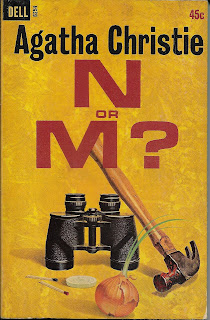 World War II Britain. Tommy and Tuppence Beresford are feeling rather old and unappreciated. They were in the thick of things in the last war--Tommy in the service and Tuppence as a nurse and driver for a General. After the war was over they had so many thrilling adventures working undercover for "Mr. Carter" of Intelligence. But now...they're told that the war office and intelligence can't use them. Obviously, it's a much younger man's...and woman's...show now.

But then "Mr. Grant" shows up, ostensibly with a rather dull, but important job shuffling papers in Scotland for Tommy alone. But it's merely a cover for him to go searching for fifth columnists at the Sans Souci, a seaside hotel. One of two top German agents, going by the code name "N" or "M,"is thought to be in the area as well, directing the British traitors. Nothing is known about N and M except that one is a man and one is a woman. Tommy puts up a mild protest--too long out of the game, but Grant tells him that's exactly what is needed. Someone that nobody knows and nobody will suspect is an agent. And he's to be sworn to secrecy-he can't even let Tuppence know what's up.

When Tommy tells Tuppence about the cover job, she is suitably upset that there's nothing in it for her and sees him off at the station on the train like a dutiful wife. Imagine his surprise when he arrives at the southern coastal town of Leahampton (by way of Aberdeen for verisimilitude) to find "Mrs. Blenkensop" well established and peering back at him with Tuppence's eyes. She managed to fake leaving the flat while Mr. Grant was talking with Tommy and overheard the whole plan. And Tuppence was determined to be in on the action. From then on "Mr. Meadowes" and "Mrs. Blenkensop" are hot on the trail of the fifth columnists--but when Tommy disappears and Tuppence is taken captive it looks like the game is up. But as Mr. Grant now knows...you should never underestimate Mrs. Beresford.

It was great fun to see Tommy and Tuppence back in action again. They may be a bit older, but they've still got what it takes to outwit those devious spies--especially Tuppence. She is quick-witted enough to see through a certain person's pose and lays an artful trap which s/he falls right into. It was especially amusing to watch their children think about them as "poor little dears--having such a dull time of it and wanting so much to be where the action is." Little do they know what their parents have been up to.

Dame Agatha gives us plenty of possible Ns or Ms--from the inn's proprietor Mrs. Perenna, who is not as Spanish as she seems to the hearty old warhorses Major Bletchley and Commander Haydock to Carl von Deinim the German refugee to the sharp-eyed Mrs. O'Roarke to Miss Minton who seems to think of nothing but knitting to the distracted Mrs. Sprot who has her hands full with her young daughter to the hypochondriac couple Mr. & Mrs. Cayley. They all seem to be exactly what they are...except maybe just a touch too much so. But surely they can't all be imposters? ★★★ and 1/2

First line: Tommy Beresford removed his overcoat in the hall of the flat.

Women are all very well in their place, but not before breakfast. (Major Bletchley; p. 25)

Last line: "We must do all we can to make up to them for having such a dull time in this war...." [Deborah Beresford]