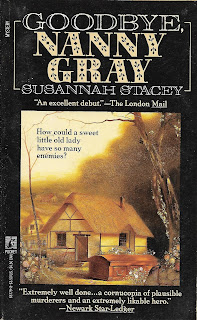 Nanny Phoebe Gray of Mouse Cottage in Saxhurst was much beloved by her former charges. She was a model nanny--furling with a firm hand and an understanding of the ways of children. So beloved was she that Gareth Herne, lord of the local manor house, left her the family fortune when he died unexpectedly. If the estate hadn't been entailed, he might have left her that too. His brother Valentine--now Sir Valentine--is none too pleased to find himself saddled with a great grand house and no means of keeping it up.

But Nanny Gray doesn't live long enough to enjoy the sudden windfall, her body is found in the nearby woods and what is first thought to be an unfortunate accident (she had fallen earlier in the week and hit her head) is soon proved to be murder. Did Sir Valentine murder her in a fit of rage over the unfair will? He's known for his sudden rages. Or maybe it was her niece Carey who stands to inherit under Phoebe Gray's will. Or perhaps it's Carey's husband--another man with a nasty temper who may have wanted to hasten his wife's inheritance. Then there's the woman who had used Nanny Gray's services so often, but who seemed both afraid of and most solicitous of the older lady.

But then a certain stipulation of Gareth's will comes into play. You see, Phoebe Gray would only inherit if she survived Gareth by 30 days and a witness claims to have seen Nanny dead a few days before that deadline. So the motives become even trickier. Superintendent Robert Bone will have to sift through the suspects while narrowing down the time of death and searching for a few vital clues--a missing floral paperweight, an ancient motorbike that's never ridden but which has fresh gravel stuck in the tires, a deadly drill, and a certain vehicle that is big enough to carry a drum set...or a dead body.

This the first in the Superintendent Bone mysteries and it has a few of the debut jitters, but overall it is a fine mystery. Plenty of suspects and red herrings with the question of the time/day of death making things interesting. I did spot the killer, but I didn't get the extra twist until it was too late. Bone is a good lead detective and his relationship with his officers is good. This is an early example of the detective being given a complicated home life--Bone is a widower who still mourns his wife. A wife who was lost in an accident that took his son as well and left his daughter Charlotte with physical and emotional difficulties. Fortunately, the home life troubles don't overshadow the mystery--unlike some more modern detective novels. I think this strikes a good balance. ★★★

First line: Somewhere in the forest a bird was making a noise like a watch being wound up.

Deaths = 3 (one hit on head; one drug overdose; one car accident)