The Longer the Thread 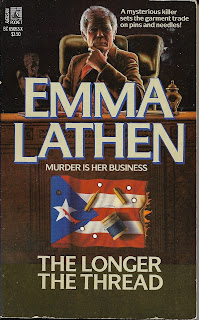 John Putnam Thatcher, senior vice president of the Sloan Guaranty Trust bank makes his way to Puerto Rico to sort out a situation at Slax, a garment manufacturer specializing in women's pants. The Sloan has backed the company to the tune of a 3 million dollar loan and there's some dispute about which arm of the company should be managing the account. Commercial Credit has backed all of Slax concerns within the contiguous United States and the bank officers in charge feel that they know the business. International Credit takes care of businesses outside the United States and believe that Puerto Rico, U.S. territory or not, should fall under their purview. Somebody needs to bring harmony back to the Sloan family. So, Thatcher goes to Puerto Rico to see the situation at first hand. He expects only business problems.

But then the garment factory suffers a spate of "accidents" that can only be sabotage. Could the Puerto Rican workers be getting tired of the American bosses? There's been talk of a push for independence and a group of young radicals have already protested at the university. Benito Dominguez, the line foreman, seems to take great delight in the difficulties posed by the sabotaged lot of clothing and the ruined machinery, but none of the Slax management believe that he could be in league with the radicals...until Dominguez is found shot to death with a membership card for the radical group in his pocket and a handful of sand. Sand which was apparently used to doctor the lubricant for the cutting machines. Did one of the managers discovery Dominguez's complicity and kill him? Or are there other factors at work? When Harry Zimmerman, head of the New York Slax office disappears and a letter is received from the head of the young radical group claiming responsibility and making demands before he will be returned, it looks like maybe the protestors have been behind everything all along. But then Zimmerman is found killed as well and Thatcher and Captain Vallejo (the Puerto Rican police officer in charge of the case) will need to review the case from other angles.

This was quite a slog. I learned way more than I wanted to know about 1970s politics in Puerto Rico--whether they wanted independence or wanted to remain connected to the U.S. The details about the Slax company weren't all that interesting and most of it did nothing to move the plot along. And--for this being "A John Putnam Thatcher Mystery" per the book blurb, there was little of Thatcher throughout most of the book. When he was there and actually investigating (which pretty much only occurs in the last few chapters), the plot moved along nicely and held my interest. But both he and Captain Vallejo (the Puerto Rican police officer in charge of the case) disappear for a good chunk of the time. You would think the most important thing in the book was whether or not Slax was going to keep production going--not that two men have been murdered. I'm glad that this wasn't my first taste of the Thatcher books--I know from the previous book I read that the mystery is good when he's more involved. If this had been my first Lathen mystery, I doubt that I would have picked up another. ★★

First line: Wall Street is the greatest financial market in the world, and the function of the market is to provide an arena for smooth and orderly transactions.

Last line: "Well, now," she marveled, "what do you know about that?"