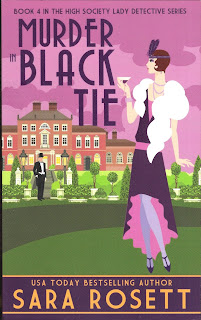 Olive Belgrave welcomes the invitation to a house party at Parkview Hall, home of Sir Leo and Lady Caroline Stone. She's about to be homeless because the owner of her boarding house is giving up the business in favor of a new marriage and it will be good to get out of London and away from the worry about where she will live next. Parkview Hall feels like a second home--she grew up spending loads of time there with her cousins Gwen and Peter Stone. Other guests include her father and stepmother, Cecil and Sonia Belgrave; Deena Lacey, a local young heiress; Inspector Lucas Longly (whom Gwen longs for...); Captain Thomas Inglebrook, a dashing young man whom Lady Caroline prefers for her daughter; Miss Marion Miller, a dithery spinster who's often asked to help even numbers at table and to make a fourth at bridge; Lady Gigi (Gina) Alton, childhood friend of Olive and Gwen; Vincent Payne, gentleman who sells antique maps on the side; and Jasper Rimington, family friend and often Olive's partner in crime...solving.

When Vincent Payne is found dead in the conservatory from the proverbial blunt instrument, Peter Stone is the main suspect. Peter suffers from trauma from the Great War and after having blacked out in the conservatory was found hunched over Payne's body. He has bruising around his eye and the state of the room indicates that a struggle has taken place. Peter has "episodes" where he believes himself to be back in the trenches--could he have thought Vincent was the enemy and killed him during an episode? Olive and his friends and family can't believe he did, but there is no motive apparent at first glance.

Several of the house party ask Olive to investigate and prove Peter innocent. Olive isn't sure that is what an investigation will prove, but she does want to make sure that the truth--whatever that may be--comes out. Jasper, as ever, is ready to help her and it isn't long before they discover that motives abound. Vincent's rare maps weren't quite as rare as advertised--the maps are indeed antique, but most of them come with famous autographs--that aren't as real as the maps. Would someone kill over a fraud? Vincent also liked to indulge in a spot of blackmail whenever the opportunity arose and more than one of the house party has a secret they'd prefer to keep hidden. And some of those secrets date back to the war when Parkview Hall was turned into a convalescent hospital for wounded soldiers.

This was another enjoyable entry in a historical mystery series that is set during the Golden Age of crime fiction. It follows the typical country house murder mystery with plenty of suspects milling around the house and grounds and lots of motives cropping up. The culprit's motive may be a typical one but the actions that provided the motive have a surprising setting and background. Olive is a clever, interesting character who has grown quite a bit as a detective since her first outing. She definitely caught a clue that missed--but given the nature of the clue, I'm not surprised that I missed it. It simply wasn't something I normally pay much attention to anyway. I enjoyed learning more background about her friends and family as well as learning about the transformation of the country house into a hospital during the war. A good, solid mystery. ★★★ and 1/2.

First line: The slash of red stood out against the brown and beige of the November countryside.

Last line: "So, Jasper," I said, "have you ever considered owning a parrot?"

Deaths = 5 (one hit on head; two natural; one shot; one suffocated)