Death Beneath the Christmas Tree 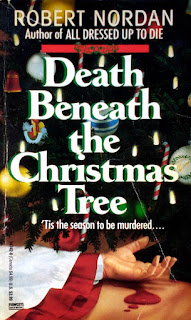 Death Beneath the Christmas Tree (1991) by Robert Nordan

Miz Mavis Lashley, a pleasant Southern widow, is looking forward to her church's Living Christmas Tree pageant. Her favorite (only) nephew Dale is escorting her and she's wearing her best Christmas finery. It will be lovely to listen to the choir and watch the little shepherds and wise men in the procession to the manger. What she doesn't expect is for one of the choir members to come tumbling out of the tree after being killed by a rifle shot from the balcony.

Mavis and Dale are mystery fans and are quick to help Detective Charles Morgan (long ago member of Mavis's Sunday School class and more than willing to accept any help he can get). But it's difficult to see why anyone would have wanted to kill Frances Sedbury. No one at church seems to know much about her--except that she was quite, kept to herself, was faithful in attendance, and choir singing was apparently her only real interest. Fortunately, Mavis has this quality that just gets people to talk to her and before long she's learning all kinds of things about Frances and other members of the choir and church family. Then the choir direct is shot outside his home and folks begin to wonder if someone has it in for church singers. Mavis's instincts tell her that something deeper is behind it.

There are several things to like about this one. First--Mavis. I just fell in love with her and her Southern charm. And she's fairly forward-thinking for an older woman written in the early 1990s. She has a way of being interested in people without being downright nosy. I also like her relationship with her nephew Dale and how she deals with the neighborhood kids. The book is short, but Nordan is able to present the atmosphere of the south in the brief sketches he gives of the town and townspeople. The plot has an interesting twist...though I do have difficulty with what prompts the first murder. Not that I don't understand the motive or think it's realistic--it just touches on one of the topics I really don't care to read about. Any more specific than that and I'll be spoiling the ending. The other thing that prevents the book from garnering a higher rating is the lack of clues--there is one big clue that Mavis spots (and I didn't until she told us), but most of the revelations come from conversations that Mavis has with folks. And there's no mystery about the conversations. It's not like someone says something that tips Mavis off and maybe you, the reader, will spot it and maybe you won't. No--you know right then and there what the meaning of everything is, so there's not a lot of tension and mystery.

Good atmosphere and appealing main characters. I'd like to try another in the series with (hopefully) a less touchy motive for me. ★★★

First line: Well, she was ready.

Last line: To think what she had been missing all these years!