Wrapped Up in Crosswords (slightly spoilerish) 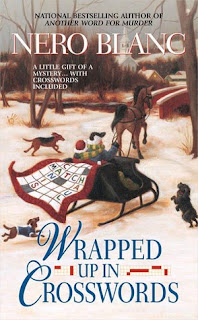 Rosco Polycrates, private detective, is in search for the perfect Christmas present for his partner Belle. He stops, entranced, before a shop window and his canine companions are convinced that he's decided that what Belle needs is a pair of live lovebirds. The dogs are not in favor of avian competitors for their humans' affections (besides birds are prey...not housemates). So, they decide that the best way to show their displeasure is to shred feather pillows and destroy the crossword puzzle clues that Rosco is planning for the big Christmas present reveal.

Meanwhile, three escaped convicts have gotten their hands on Santa suits and have descended on Rosco and Belle's town of Newcastle Massachusetts. They hold up a gun shop owner--stealing weapons--and break into a local diner. Rosco and two of his pals from the police department (where he served before becoming a private eye) are also running around in Santa suits, collecting toys and other presents for needy children. Confusion ensues when State Troopers mistake our heroes for the bad guys. Of course, all's well that ends well and the costumed convicts will be back behind bars by the end of the story and our heroes will get the presents to the kids. But will Kit and Gabby (the dogs) have to make room in their inn for a couple of wandering lovebirds? We'll just have to see...

A very light piece of Christmas fluff with a hint of mystery thrown in--though there is very little detecting going on. Two of the crooks are caught off-stage by the "Staties" (State Troopers) and the third pretty much falls into NPD Detective Al Lever and Rosco Polycrates' laps. I'd just like to know what the escaped convict was doing in the greenhouse. Not exactly an ideal hideout in the middle of a Massachusetts winter. The book is very sweet and seems to be more focused on the relationships between all of the ongoing characters. I wasn't terribly keen on the talking dogs--that is, they talk to each other and other dogs and not to the humans (do they do this in all the stories? I don't remember animals having conversations in the others I've read in the series). But it was a pleasant day's read. ★★ and 1/2

First line: Rosco Polycrates entered the Newcastle Police station through the side door on Cabot Alley.

Last line: "I guess it's going to be cold enough for my gift after all."