In the Crypt with a Candlestick 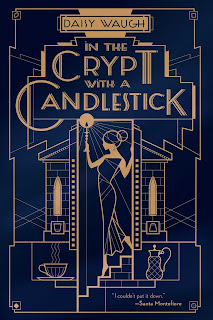 In the Crypt with a Candlestick (2021) by Daisy Waugh

Sir Ecgbert Tode has finally shuffled off this mortal coil and his widow, the still feisty (at 70-ish) Lady Tode is ready to hand over the reins of the family estate, Tode Hall, to the next generation. She's been counting the days until she can kick over the traces and go live at her place in Capri. Unfortunately, someone else has other plans and what she winds up kicking is the bucket...

In this case, you definitely can't judge a book by its cover. The art deco cover picture with very twenties-style lady would make you think a historical, Golden Age mystery was in store. The blurb on the back:

would also lead you to believe you had something set in the twenties or thirties. You would be wrong. Discovering that mistake, you might think you were getting a modern take on the Golden Age mystery. You'd be pretty much wrong on that assumption as well. That may have been what Waugh was going for...after all we have a huge ("have you forgotten how big the house is? That's like being Town Manager. Imagine being Mayor of the most beautiful town in the entire world.") country house. We have Sir Ecgbert and Lady Emma Tode. Well...we Sir Ecbert briefly...after all, when he's introduced he's already dead at 93. And Emma doesn't stick around too long. But, hey, we get another Sir Ecgbert and various relations. So, yeah. "typical" Golden Age country house family. And we have the devoted (sortof) butler who's been with the family for donkey's years. And the elderly ex-housekeeper who winds up back at the estate. And various people swanning around like it might be the Golden Age. But it's not...we've got cell phones and internet and email. And the country house has become a tourist attraction because taxes and because it was used as the location for a "Downton Abbey" sort of television show. People are takins selfies in the bedroom where the Duke of Whosit (played by Laurence Olivier [seriously?]) played out his death scene.

As indicated by the title we wind up with a (fresh) corpse in the crypt bashed with a candlestick. And we're supposed to want to know who did in Lady Tode in such a foul manner just when she was getting ready to enjoy herself. But...honestly, the mystery is just not that interesting. And it's certainly not nearly as humorous as Wodehouse nor as well-planned and plotted as Christie. All of the "clues" to whodunnit are dumped out in the very last chapter and there is no way on earth the reader can get the answer by deduction. I mean, there aren't exactly heaps of real suspects running round, so it's not difficult to guess. But spotting the killer because they're pretty much the only choice is a far cry from solving a cleverly plotted puzzle. I'm super-glad I checked this out from the library and didn't buy a copy...  ★★

First line: Lady Tode stood by the Great North Door of her important house, a vision of slimness and grief as she watched her husband take leave of the building for the last time.

Deaths = 4 (one natural; one drug overdose; one hit on head; one fell from height)