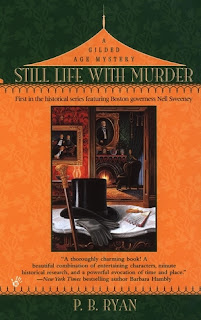 Set in Boston, 1800s. The Hewitt family is one of the wealthy elite who have lost sons to the Civil War. Nell Sweeney is an Irish immigrant who has known great hardship and now works as an assistant to Dr. Greaves. When Nell Sweeney assists the doctor at a particularly difficult birth for one of the Hewitt's maids and Viola Hewitt decides to adopt the girl's baby, she asks Nell to take on the role of nursery governess. Three years later, after Nell has proved herself as a governess and won Viola's confidence in many other ways, the Hewitts are dealt a blow. Their eldest son, William, thought to have died at Andersonville in the war has appeared in Boston--as the prime suspect in a murder.

Viola is certain that Will is innocent, but her rigid, upright husband is sure he's guilty and washes his hands of his son. Having no one to turn to and recognizing that Nell has a street sense and good observational skills, she begs her to help find a way to prove that Will, a former surgeon, did not kill. Nell isn't sure how she will do it, but she promises the woman who gave her a chance to make something of herself that she will try. Her investigation will take her from the prison to a cheap pub to an opium den.Will insists he did it...even though he has refused to plead guilty. Nell knows he's hiding something, but what? And why?

I wanted to like this one a lot more than I did. It didn't even help that I like Nell. She's an intelligent young woman who takes on a task that's really too big for her. She makes mistakes and that makes her realistic--instead of making her the super-brilliant, always right amateur. She stumbles into situations that she's not prepared for and makes assumptions about clues in her rush to do what Viola asks. She also becomes very drawn to Will and wants to help him for his own sake. Will is exasperating--not willing to give her any help. It becomes quite obvious that he is innocent and is covering for someone. I'm disappointed that Nell didn't figure that out sooner.

Unfortunately, the mystery plot itself did not draw me in at all. Even though the motive behind the murder is compelling (and even understandable), it just did not work for me. I have two more of this series on my TBR mountainscape and I honestly don't know that I'll be compelled to read them.  ★★

Last line: He turned and walked away, into the morning sunshine.

Deaths = 3 (one stabbed; one shot; one gassed/poisoned)

I loved the series by P.B. Ryan. I read all the five books in one go. I think because of the female protagonist and the man (forgotten his name) but being so under the influence of opium. It was, first of all, historical fiction which I love, and then these odd characters and their odd habits. I was just sorry when she decided to stop the series.

Interesting color scheme for a book that doesn't take place around Halloween.