A Surprise for Christmas 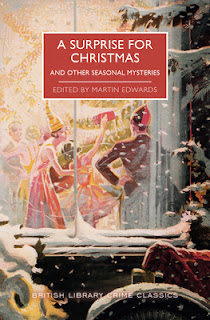 A Surprise for Christmas (2020) by Martin Edwards (ed)

Another fine collection of mysterious Christmas tidings put together by Edwards and the British Library Crime Classics series. We have everything from jewel robberies, to killer radio sets to Christmas ghosts who solve modern murders. The best of the stories are "The Hole in the Wall" by Chesterton, "Death on the Air" by Marsh, and " A Surprise for Christmas" by Hare. Even though I'd read the Marsh story previously, I still find it a nicely put-together little piece and the ending of Hare's story is well-done and leaves the reader considering what will happen next. ★★★ and 3/4

"The Black Bag Left on a Doorstep" ~Catherine Louisa Pirkis: Craigen Court is burgled and 30,000 pounds worth of jewels have disappeared. Loveday Brooke, first female professional detective, is called to take up the case--she is also interested in a black bag containing clerical garments and a strange note which has been left on a spinster's doorstep. Are the two connected?

"The Hole in the Wall" ~G. K. Chesterton: Lord vanishes from his holiday fancy dress house party. One of the guests heard strange banging noises in the middle of the night and then was awakened at dawn by a cry for help. Murder is soon suspected...but where is the body?

"Death on the Air" ~Ngaio Marsh: It's Christmas Day and Septimus Tonks intended to listen to the Christmas programs on his fancy wireless set. But he's found dead, leaning up against the radio cabinet as if to listen more closely. It appears he's been killed by his favorite hobby...but by whom and how? It's up to Chief Inspector Alleyn and Inspector Fox to answer those questions.

"Person or Things Unknown" ~Carter Dickson: A historical mystery in which the host of a holiday party invites his guests to investigate a supernatural death from the past--which took place, naturally, in a room where no one wants to sleep now.

"Dead Man's Hand" ~E. R. Punshon: A snowstorm gives cover to a man who has robbed and killed his employer. It looks like he might get away with it...but then his wife blurts out a sentence that will likely seal his fate.

"The Christmas Eve Ghost" ~Ernest Dudley: Craig, the detective, is asked to investigate the ghost of a dancing girl and winds up solving a murder.

"Dick Whittington's Cat" ~Victor Canning: The cat in question is an actor playing the part in a pantomime. When he singles out a couple for attention, he has a fall and the lady's bracelet disappears...is the cat the thief or is it her escort who has been attendance when several other bits of jewelry have gone missing?

"On Christmas Day in the Morning" ~Margery Allingham: Campion investigates the death of a postman who was hit by a car on Christmas morning. Did it really happen when and where it would seem it had to have happened? No matter which way the police look at it, it seems impossible.

"Give Me a Ring" ~Anthony Gilbert: Gillian is planning a lovely Christmas with her beau when she goes out to pick up a few last minute items. She gets lost in the fog, finds a little shop with a lovely ring she decides she wants, and winds up smack dab in the middle of a drug ring and she and her beau come close to celebrating their last Christmas together...or with anyone. Arthur Crook saves the day.

"Father Christmas Comes to Orbins" ~Julian Symons (same story appeared in The Christmas Card Crime & Other Stories under the title "Twixt the Cup & the Lip"): Mild-mannered bookshop owner, Mr. Rossiter Payne has an odd little hobby--jewel robberies. And when the Russian family jewels are put on display at Orbin's department store can't resist planning the perfect crime. But then things go wrong--if only he hadn't made that one comment to his shoe repair man.

"The Turn-Again Bell" ~Barry Perowne: The rector's son is set to get married on Boxing Day, but there is tension in the air (all three of the rector's sons had admired the fair Iris) and a dark legend attached to the church bells. Not really a mystery, but a dilemma is solved.

"He was not there when he did it," explained Fisher. "It's a poor sort of murderer who can't murder people when he isn't there." ("The Hole in the Wall")

Last line (last story):So finally, at peace with himself, this one of the many Rectors the parish had known walked on home, and the small, flint-built, eleventh-century church, on the knoll overlooking the common, was left alone in the wide, white silence under the stars.

Deaths = 10 (one drowned; one electrocuted; two stabbed; three shot; one killed in an explosion; one hit by car; one neck broken)