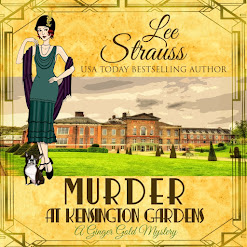 Lady Ginger Gold takes her dog "Boss" (short for Boston) for a walk in Kensington Gardens only to discover the body of woman under one of the bushes. The woman wasn't dressed for the weather (in fact, wasn't dressed quite up to standards) and Ginger is appalled to see that body is that of Emelia Reed--the estranged wife of Chief Inspector Basil Reed. Emelia has what looks like a snake bite on her neck and it winds up that she did, indeed, die from snake venom. Basil and Ginger barely get started investigating the murder before Superintendent Morris, Basil's dimwitted, slightly envious superior, decides that Basil, as the victim's husband, is the obvious suspect.

Before Basil was arrested, he and Ginger had discovered that Emelia had been working as a burlesque dancer in one of the less reputable clubs. In order to find the real killer and clear Basil's name, Ginger goes undercover at the club--assuming a French identity which served her well in her secret service work during the war. "Antoinette" becomes popular with her French maid routine and manages to dig up evidence that several people might have had motive to eliminate "Destiny" (Emelia's pseudonym at the club). There's the fact that she was blackmailing a few of the club workers, as well as an American ambassador. There's also the rivalry between her and her fellow dancers--for the best position in the dance line-up as well as for the attentions of certain members of the regular audience. But when some of the suspects also wind up dead from snake bites, it begins to look like Ginger has been following the wrong leads. What clues has she missed?

Things are beginning to wear a bit thin in this series...the on again/off again nature of the relationship between Ginger and Basil for one thing. In the last book, Basil's wife had once again had an affair and Basil had decided to finally divorce her--he'd given her a second chance and tried to make things work, but Emelia let him down again. He and Ginger started seeing one another more seriously and it looked like the course of true love was straightening out. And then Emelia gets murdered and we're back to square one--Ginger doubting that Basil really loves her. Not understanding that the man could honestly be upset and mourn the death of a wife he'd decided to divorce. To doubt that he ever had feelings for Ginger at all. Honestly? It doesn't help that Basil goes all distant and then declares at the end of the book that he's been put on leave and so he's going to go to South Africa and "find himself" (my words, not his). I'm getting a bit tired of it all.

In addition to my exasperation with the romance on the agenda, there's Strauss's insistence that there simple must be a chattering,  immature young woman in Ginger's life to make things difficult. We had Felicia (Ginger's sister-in-law), but just when we get Felicia settled down a bit and showing some maturity Strauss decides to thrust Ginger's half-sister Louisa on us. Louisa is your stereotypical brash American--loud, blurting out everything that pops into her head, and she makes Felicia at her most annoying look like a saint. And Louisa was only in evidence in the last few pages of the book. I can't wait until the next book where she's bound to be more prominent.... [sarcasm font on full]

The mystery is decent (though I'm not sure I'm completely on board with the logic of making Emelia a burlesque dancer and a blackmailer--but once you accept that's just the way it is...). I did spot the villain of the piece (there were a couple of clues dropped that I actually spotted), but I missed what the motive was. Perhaps it was explained and I just wasn't paying proper attention to the audio novel at the right moment...Anyway, not the best of the series, but I will keep going to see if we ever get Basil and Ginger together and leave them together. ★★ and 3/4.

Last lines: "I'm getting married." Ginger gulped. "To whom?"