Reprint of the Year: Murder in the French Room 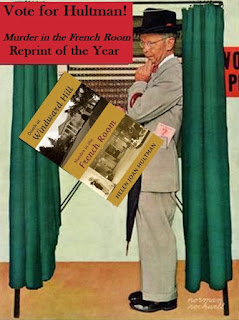 For the last several years, Kate at Cross Examining Crime has been rounding up the vintage mystery bloggers and having us perpetuate her brilliant brainstorm (one of many that she has had). In the wake of various publishing houses recognizing the virtues of Golden Age (and more recent) vintage crime novels through reprint editions of both well-known and more obscure titles, Kate thought those of us who love those vintage mysteries would like the chance to feature the year's reprints and make a pitch for our favorites to be voted Reprint of the Year (ROY). We loved the idea so much that we keep coming back for more.
*******Voting Booths Are Now Open!! Go HERE to cast your votes. You may submit up to three selections. Please make sure at least one of them is for a Reader's Block choice!*******

My second choice is Murder in the French Room by Helen Joan Hultman. This 1931 mystery was reprinted by Coachwhip Publications in an edition which also includes Death at Windward Hill. I own the Mystery League's edition (pictured below)--so I can't tell you anything about that second title. I picked it primarily because it's been sitting on my TBR stacks for a while and the chance to use it for the ROY Award nomination gave me a good reason to read and review it. So, this nomination is more a leap of faith than last week's entry.

It winds up that the French Room is the posh section of the Line and Hollis department store in Buckeye Heights an urban setting in Ohio that seems to be trying to give New York's fashion row a run for its money. One wouldn't expect to find a "Madame" anybody managing a high-class ladies department in a store in a Cincinnati-type town during the 1930s, but Buckeye Heights certainly seems to imply that connection. And the murder that happens takes place in the dressing room. Joyce Terry leaves her customer alone just long enough to retrieve her order book...and be detained by the floor manager. When she returns to dressing room E to finalize the sale, she finds her customer stabbed to death. Madame Nordhoff, the ladieswear manager and buyer, is first on the scene, followed quickly by Jessica Brooke the store detective and then police detective Dan Bratton.

Unfortunately, Joyce didn't get her customer's name before running off for the order book and someone (the murderer or someone else?) has taken the woman's purse. She wasn't a regular customer at Line and Hollis and no one seems to know who she was.

Once the victim is finally identified as Vivian Agnew Thayer, second wife of the wealthy Rupert Thayer, things begin to get interesting. Bratton soon learns that many people with connections to Vivian were in the store that day...it's just a matter of discovering if any of them had motives and, if so, whose was the strongest. There are many false trails and false clues and, to be honest, a few too many characters running around for this reader to keep track of without a scorecard. While there are several things to like about this story from setting to strong female characters in both Jessica Brooke and a reporter named PaulaPringle, it does become a bit difficult to keep all the players straight. 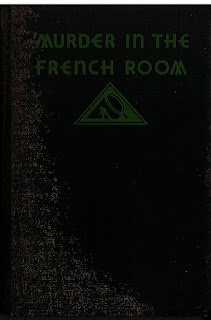 If you like puzzles that require keeping track of who was where when and could character X have made it to the scene of the crime and back again with nobody noticing, then this is definitely right up your alley and you should vote for Hultman for the ROY Award. If you like mysteries with an interesting setting, then this will also be for you. I'm afraid that if the department store setting makes you think that there will be lots of descriptive bits about ladies' outfits (Moira), then you'll be a bit disappointed, but don't let that deter you from choosing Hultman when it's time to cast your vote. And--you'll be happy to know that fashion does work it's way into the solution of the mystery. But...if you don't think I'm selling Murder in the French Room hard enough as a big ROY contender, then go back to last week's nominee--The Odor of Violets. Baynard Kendrick definitely deserves your vote!

**Note of interest: my Murder League edition contains the second of three Baffle Cases. These were short stories published at the end of three Murder League mysteries and set up as contests. The story was published without a solution and readers were encouraged to solve the crime themselves and submit answers in an effort to win prizes. Solutions to the Baffle Cases were supposed to be published in subsequent volumes--but this happened for only the first case. Murder in the French Room includes the story "The Crime at Laurel Lodge." I think I've figured out the solution, but I guess I'll never know for certain.

First line: Joyce Terry scuttled from the cashier's desk across the taupe-carpetted expanse of the women's ready-to-wear department of Line and Hollis's and into the more secluded quarters of the French Room.

Last lines: "It was a great case, Galway, but, believe me, it's the last time I ever want to have to run down murder in a department store. I'm not that kind of ladies' man..."

I wasn't familiar with this title or author so your post was of great interest. I only know one other fashion/boutique mystery and that is Now I Lay Me Down To Die, but yours precedes it by some years.

Bev - Another new author to me. This sounds interesting so today I received the Coachwhip double of this one plus Death at Windward Hill. I look forward to giving Hultman a try. Thank you.

Scott: You're welcome. I hope you enjoy it!