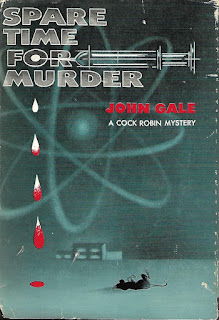 Manders End, I thought. Yes, I would drive there now in the Pardiso and stay the night in one of those nice sounding pubs. That was how the trouble started. Spare Time for Murder (1960) by John Gale

For reasons inexplicable to me (other than it fits with the plot) Anthony Somers takes one look at a flyer left in the glove compartment of his brand new (to him) Paradiso car and decides that it's been his life's ambition to go to Manders End, home of the Manders End Research Laboratories. Now, if I were looking for somewhere fun and/or relaxing to spend my holiday, I don't think a village whose claim to fame is a research laboratory would be my first (or second or tenth) choice. But maybe that's just me.

Then, the next inexplicable thing happens. He walks into a pub at Manders End and watches the owner be unusually interested in his car. A girl named Cynthia Trail at the bar mistakes him for a man named Saunders and does he correct her? Oh, no. He just lets it lie and winds up letting the pub owner call another inn and make a reservation for him (and his new friend Cynthia)...under the name of Saunders. But then he signs in as Somers (does nobody wonder why the different names?). Did he tell Cynthia his real name on the way over? Does she believe him? Gale certainly doesn't think we need to know.

Perhaps Somers is just looking for a bit of adventure to liven up his life. Who knows? After all, when we meet him, we learn next to nothing about him. He's got two weeks of holiday left. That's is--we don't know what he does for a living--whether he's got a deadly dull job or what. Later, Gale casually drops the fact that Somers is in the Navy. Supposedly doing hush-hush things. But for a guy who does hush-hush things, he certainly blunders about. It's a miracle that he gets out of this little adventure alive.

So...anyway, Somers gets involved up to his eyeballs in a thriller that involves a secret lab, unusual experiments, and mysterious deaths. Scotland Yard, in the form of Inspector Clarke, is on the spot--wondering why two men who had connections with another hush-hush place have suddenly died in mysterious "accidents." When Clarke finds Somers in Manders End, he checks up on him and discovers that he's just the man he can trust. Thye get down to business figuring out just what Dr. Larkins is doing up in that lab of his...and whether or not he's on the side of the angels.

The blurb on the dust jacket flap calls this "fast-paced and convincing." Fast-paced, I can agree with. I sat down and read this in about an hour and a half. Once Somers gets installed in Manders End, the pace picks up and zips you right along to the end. Convincing? Not so much. I still find it odd that Somers wants to spend his holiday with his spiffy new sports car in an out-of-way place that has only a research lab as its claim to fame. And Somers isn't really the hero-type. Perhaps Gale is going for the "average guy thrust into extraordinary circumstances" trope. But--if you buy the premise, then this is a fun ride and Somers (bumbler though he is) is likeable fellow and his relationship with Clarke is a good one. I also appreciated that Gale did something a little different with the boy-meets-girl storyline.

If you're looking for a whodunnit puzzler, then this definitely isn't going to fit that bill. But for adventure, this thriller might be just what the doctor ordered. ★★★ and 1/2.

First line: I still had two weeks' holiday left when my Premium Bond came up, and this was enough to decide me.

It seems a pleasant enough place. But there seems to be something a shade wrong with it. It is as though people are waiting for something to happen; something is going on that is wrong. It is going on deep down underneath and you can't tell what it is; you only know it is there because now and then it just disturbs the surface and distorts it. (Tony Somers; p. 59)

Last line: "Muriel will have to wait," I said.

Deaths = 7 (one drowned; beaten to death; one bombed; one mauled by dogs; three shot)