Murder at the Mortuary 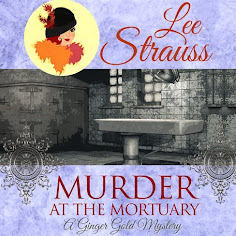 Murder at the Mortuary (2020) by Lee Strauss

The previous book left us with a cliffhanger. Ginger Gold had been investigating two mysteries, one of which involved a missing young actor. Throughout the story, she had no luck tracing the man and then the book ends with Agnes Green's body showing up unannounced at the morgue (no paperwork, etc) among a group of other cadavers. Before long more unregistered bodies have appeared and Ginger and Inspector reed find themselves investigating a series of murders that appear to be work of the Italian mafia--a group that has recently gotten a foothold in England. There are indications of cocaine smuggling and horse doping in addition to murder, but finding the evidence to tie the deaths to Charles Sabini, horse racing enthusiast and Italian mob leader is difficult. They have little luck identifying the middle man (or woman) at the morgue who has been forging the papers for the extra corpses.

This is Ginger's first paid job as an investigator. Angus Green's father and brother hire her to find out what really happed to Angus and help the police bring the culprit to justice. She also feels somewhat responsible because her sister-in-law had asked her to find the man and she had failed. Things get very dangerous--not only for Ginger but for both Hayley, her friend who is studying to be a forensic doctor, and for Inspector Reed as well. And they will find that the mob has a reach that touches some who are very close indeed.

Another good historical mystery. This one is tinged with a bit more danger and action than previous installments. But Strauss continues her efforts to fairly clue her mysteries and create a more classic detective story. There were parts that I figured out fairly easily, but there was enough left to make the mystery intriguing. I thought the design to use the morgue to hide victims in plain sight (if you will) was clever. Not quite up to the standard of the previous story, but still very good. ★★★ and 1/2.

First line: It was unclear how long Angus Green had been dead.

Last line: Ginger wouldn't leave this hospital until she found out.