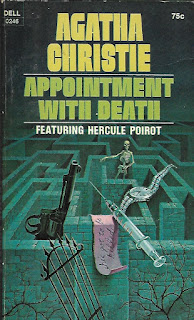 Appointment with Death (1938) by Agatha Christie

Mrs. Boynton ruled her family with an iron will. She did not abuse them physically, but she manipulated them. Their father had left them at her mercy financially and she in turn had them at her mercy emotionally. Dr. Gerard and Sarah King, both medical professionals, recognized the elderly woman as a mental sadist--hers was not the nature that wanted them to dance on attendance purely to make her life easier. Oh no, she made them dance on attendance in order to make their lives a misery. She got great pleasure out of causing anguish to everyone she could.

Having gotten as much fun out of that as she could by keeping them under her thumb at home, she decides to take them on a trip to Israel, Jordan, and Egypt. Her plan? Perhaps to give them a glimpse of what life could be like and then to snatch it away from them again. Mrs. Boynton seems to enjoy the most cruel part of the cat and mouse game. But she also creates a situation where the nervous tension is so great for her sons and daughters that it may become unbearable--in ways she cannot control.

So...it will probably come as no surprise that Mrs. Boynton is killed. She was found sitting high above the camp at Petra, like an obscene Buddha--just has she had done each evening. But this time she is dead. At first it appears that her heart (well-established as diseased) had given out from the exertions of the journey to the desert location. But Dr. Gerard isn't satisfied. A quantity of digitalis is missing from his store of drugs. A hypodermic needle disappeared from his bad and then reappeared after the death. He has also observed the Boynton family. No, he is not satisfied. So, he reports to Colonel Carbury (acting as magistrate) and the colonel, who prefers things to be tidy, requests that his guest, Hercule Poirot, review the facts and give a professional opinion. Even then, he's not sure that Poirot can do it. Poirot, very sure of his own powers, promises that Carbury will have the truth--there may not be enough proof for a trial, but the truth will be known. And he will provide that truth within 24 hours!

This is not one of my favorite Christies. The build up to the murder is long and almost as torturous as Mrs. Boynton's mental torture of her family. Perhaps that's the point--to mirror what the family has endured at the hands of the matriarch. Long before the woman is dead, I was longing for her murder to happen, so we could get on with the detection part. After introducing Poirot briefly at the beginning of the story--he overhears two people discussing the fact that "she has got to be killed." Then our favorite detective disappears for about half the book. Once Poirot takes on the investigation, things pick up considerably. It was very nice to sink into the comfortable interviews with Poirot. I was also very proud of myself that I picked up on one the biggest clues to the murderer's identity--I solved this one entirely before Poirot's gathering of the suspects at the end. It may be that remembered it (after all, I have read this one before), but I don't think so. Christie has been able to fool me repeatedly in one way or another, even in those mysteries that I have read more often than Appointment With Death. I haven't read this one since I first discovered it at the Wabash Carnegie Library about 40 years ago and it really isn't one of those solutions that would impress itself on me like, say, Orient Express or Ackroyd.

All that said, just about anything by Christie is miles ahead of most of what's published today--especially those with blurbs claiming that the author writes like Christie or has a plot Christie would be proud of and etc. That's rarely true. ★★★

Last lines: "She didn't get what she wanted out of life. It must have been tough for her."