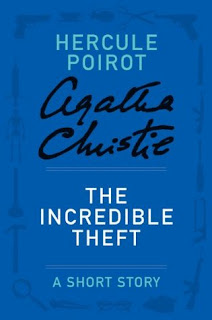 "The Incredible Theft" is a short story by Agatha Christie which was originally published under the name "The Submarine Plans" and, for reasons not quite clear to me, listed as a separate entry on the Agatha Christie perpetual challenge I am participating in. This particular version of the story involves Lord Mayfair, the Minister for Armaments, (Lord Alloway in the original) and a set of top secret plans for a new type of bomber plane. As the previous title indicates, this has changed from plans for a new submarine. Mayfair deliberately invites a woman who is suspected of dealing with foreign powers to his home when the plans will be on the spot. He tells his old friend Sir George Carrington (a navy man and Air Marshall) that he's done this to try and catch the woman red-handed--there's all these suspicions, but never any proof. He hopes the idea of a big coup will flush her into the open and cause her to make mistakes. But then...the plans are practically stolen from under his nose and apparently no one could have done it. Sir George suggests they call in Hercule Poirot to discreetly get to the bottom of it.

A nifty little mystery that stands alone quite well  (though, again, I'm not sure exactly why it does...). Poirot is not quite as pompous and full of his own powers as is sometimes the case and he even deigns to search for footprints in the wet grass surrounding the study where the plans had been kept. The solution is fairly straightforward, but short stories tend to be a little more so than the longer novels. A fun entry in the challenge line-up. ★★★ and 1/2.

First line: As the butler handed round the soufflé, Lord Mayfield leaned confidentially towards his neighbor on the right, Lady Julia Carrington.

Apparently, the "Theft" version is also a bit longer than the "Plans" version, and they've had some divergent publishing histories over the decades.

"An expanded version [of] The Submarine Plans, which was serialised in six instalments in the Daily Express from April 1937, The Incredible Theft first appeared in the collection Murder in the Mews in the UK later that year, but was not published in the original US edition."

"Later lengthened into the novella The Incredible Theft, the plans for a top-secret submarine are stolen during a party held by the head of the Ministry of Defence.

"It ["Plans"] first appeared in book form the US collection The Under Dog and Other Stories in 1951. It was not until 1974 that the story featured in a UK collection, Poirot’s Early Cases."