The Death at Yew Corner 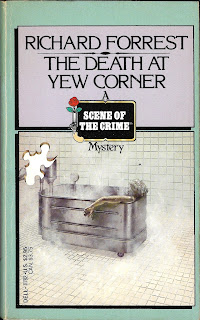 Dr. Fabian "Faby" Bunting was a force to be reckoned with. An opinionated former educator who now lives Murphysville Convalescent Home, she spends her days shouting encouragement to the home's staff who are currently striking for better pay and benefits. She's a loud supporter and doesn't mind who knows. She also spends a bit of time watching what everyone gets up to with her old pair of opera glasses. But she watches one too many odd things and winds up scaled to death in the center's therapy hot tub. The center's managing director is all set to sweep the death under the rug--disguised as "heart failure" (well one's heart probably would fail if one were dumped into scalding water...), but Faby has an ex-student and friend in former Senator Beatrice Wentworth.

And Bea Wentworth learned from the best when it came to investigating oddities and not taking no for an answer. She knows there's no way Faby climbed into that scalding tub by herself (she was wheelchair-bound) and no one will fess up to helping her in. It's intimated that maybe Dr. Bunting committed suicide because she knew she was old and declining in health, but who in their right mind would commit suicide by scalding water? Bea and her husband Lyon, have gotten involved in murders before and insist that their police friend Chief Rocco Herbert investigate. He's a bit reluctant until it becomes apparent that the striking workers' union leader disappeared at about the same time as Faby died. Perhaps Faby saw what happened to Marty Rustman? And then one of the orderlies on duty that day at the convalescent home turns up dead....and more deaths follow. It seems that the convalescent home has become a center of death instead of recovery and there's quite a trail of corruption leading to the owners of the convalescent center. But is that the motive for murder? Or is something else driving the killer? It's up to Lyon--with his eye for small details--to put all the clues together.

I wasn't all that taken with the background of the strike and the corruption going on at high levels. It was all a bit heavy-handed and really disrupted my enjoyment of the mystery. Which is unfortunate, because Forrest really sets a pretty problem. You have the matter of a dead man who maybe isn't. You have a string of deaths that may be related and, if so, may be revenge killings. But--you have to decide whether someone is using all that as cover...and, if so, who? And, finally, Forrest gives us a really nice locked room murder towards the end. The explanation is interesting and I'm still trying to decide if it really could have been done in the time allowed. If you buy into that possibility, then it really is a nifty locked room solution. I'm pretty well giving all the star value to the locked room portion of the story. ★★ and 3/4--not quite a full three.

Last lines: He wanted to cry but knew it wouldn't help. He knelt next to them to help scrub.

Deaths = 7 (one scalded to death;  four suffocated [one buried alive; one drowned in wet cement; one buried in debris from dump truck; one with plastic bag over head]; one poisoned dog named Kurt; one shot)