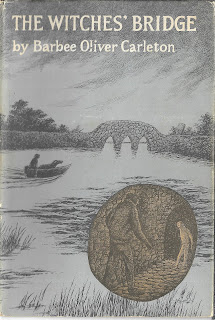 Set in Massachusetts. The Pride family has had its share of troubles over the years. During the time of the witch trials in America, an ancestor by the name of Samuel Pride was accused and executed as a witch--based on an accusation by the Bishop family. The years that followed found the Prides being blamed for all that went wrong in the area around Pride's Point and superstition kept everyone from using the causeway bridge that led to their land. Rumor said that the witch Samuel would appear as a large black dog and folks claimed to hear Samuel playing his fiddle near the Witches' Bridge.  And a feud-state existed between the Prides and the Bishops from that day to the present.

Years later Daniel Pride (our young hero's grandfather and namesake) decided that all the superstitions were bunk and determined to lay the feed between the families to rest. He offered an olive branch as well as making an offer to buy back the shipyard which the Bishops could no longer make use of. But on the night the transaction was to take place, something strange happened. Daniel set off across the causeway to meet the Bishops, but he never made it. Footprints showed that he had run--as if in fright--and he was found dead near the family chapel. There was a mark in the mud from the briefcase he had carried, but no briefcase was ever found. The Prides believed the case had the papers proving that the shipyard had been bought and paid for, but the Bishops claimed Daniel never arrived for the meeting and the case should still hold the money. Each side believed the other to be at fault--and so the feud continued.

Young Dan Pride's father left Pride's Point (and America) as soon as he could--living for the most part in England. When Dan's father and mother are killed in a plane crash, his Uncle Julian sends for him to come live at the family estate. Dan hopes for a warm welcome and a new home, but his uncle is withdrawn and the townsfolk are wary of a new Pride--especially when Dan hears the strange music and talks about it. And even when he seems to make new friends--the handyman Billy Ben and the twins Pip and Gilly--there is unexplained tension. He's just not sure who he can trust. Especially once he realizes that someone is still searching for that missing briefcase and someone is setting him up to be a scapegoat when things go wrong. Can Dan find the case before his unknown enemy and will he be able to prove himself innocent when the time comes?

Carleton does an excellent job with atmosphere and uses the witch legend to full advantage. It may be the middle of summer, but the foggy marshland, eerie nights in the country, storms rolling in, and the spooky music near the bridge all work to make this a very appropriate book to read during the month of Halloween. We get all the trappings for a spooky story--a witch's ghost, creepy music, an ancient curse (uttered by the original "witch"), a large, ugly black dog, and an unexplained death. If the atmosphere hadn't been so good and the characterizations of Dan, Pip, Gilly, and Uncle Julian hadn't been so vivid, it might have been easy to read this as a Scooby-Doo type mystery. After all, good ol' [redacted] winds up being the villain and s/he nearly says "If it hadn't been for those meddling kids..." But Dan's struggles against loneliness and his efforts to find friends in a new place are very poignant and his bravery in the face of those against him and the mystery surrounding him makes this a better than average story.

It was also good how Carleton used Dan's overcoming his fear of swimming to help him solve the mystery of what happened to the briefcase. If he hadn't finally made friends with Pip and Gilly and learned to swim with them, the mystery would never have been solved. There are a lot of good lessons about overcoming--overcoming one's own doubts and fears; overcoming prejudice; and overcoming superstition. The one thing I didn't care for was the escape of the villain at the end...after all that s/he had done we (and Dan) deserved to see them hauled off to jail. ★★★★

First line: The gray day ended as it began, too cold for May, and threatening a storm.

Last line: Then they reached the bend, and Pride's and all with it was lost to view.

Deaths = 5 (two plane crash; one hanged; one tortured; one natural)