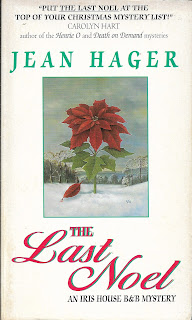 It's time to get ready for the annual Christmas pageant at the Community Church in Victoria Springs. Tess Darcy, owner of the Iris House Bed & Breakfast, is delegated to let the church's usual director, Claire Chandler, know that she's being repaced by an out-of-town drama professor. That's enough to make Claire furious, but it doesn't help that Sherwood Draper was recommended by her least favorite person in the world, Lily Brookside. It isn't long before the womanizing professor has most of the pageant personnel up in arms at the first meeting. His wife knows Lily wanted him to come direct the pageant so she could try to get her hooks into him and is giving them both the evil eye.. Denny Brookside isn't at all pleased at how his wife looks at this Noel Coward wannabe. The organist, Elizabeth Purcell, is incensed that she's being replaced by taped music; the children's director, Pam Yoder, can't believe he plans to ditch the children's portion of the program all together; and the choir director, Mike Tandy is so outraged that the choir has been reduced to three little Christmas songs that he gets up and leaves the sanctuary.

The afternoon session doesn't go any better. In fact, it gets worse when Draper gets caught a little too cozy with one of the ladies in the dressing room. Sometime later he's found in that same dressing room with a pair of shears sticking out his back. The local police chief is out of town and his eager stand-in thinks he's got it all sewn up when a witness claims to have seen Draper's wife with shears that afternoon. But Tess isn't convinced he has really investigated all the angles and she's determined to be sure it's truly the guilty behind bars.

This is the third Christmas-themed book I've read in a row--and the second to feature a Christmas a pageant (or it's rehearsals) as the venue for the crime. I have to say that I immediately spotted the primary reason Draper was killed--though I didn't see the way it shook out coming. I got completely confused about who could have been involved in the primary reason and then Hager shook the kaleidoscope a bit and changed the view of the pieces anyway. It also didn't help that life happened in the middle of my read and I may have lost my original train of thought. All told, it was an enjoyable holiday read and The Last Noel is my favorite Christmas mystery so far this season.  ★★★ and 1/2.

First line: "You're the last person I expected to stab me in the back, Tess Darcy!" stormed Claire Chandler as soon as the phone was picked up, without even giving Tess a chance to say hello.

Last line: She made a U-turn at the next corner and headed for Luke's house.