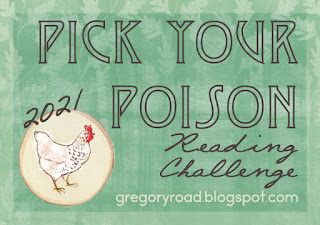 When the Pick Your Poison Reading Challenge came out last year, I initially resisted the temptation because I had this silly idea that I would limit my challenges to only 20 in 2020. Well...that thought quickly went out the window and I jumped in with both feet. I enjoyed myself so much that I've been watching for when the 2021 version would go up...and here it is! As I did last year, I'm going to commit to a Baker's Dozen (13 books). I'll probably do more, but my commitment will be met at 13.


Once that's complete, I'll list all the books by category and see how far I get with the list.

Challenges
~Book over 500 pages
~Book about overcoming obstacles
~Book with word "hard" in the title: The Hardway Diamonds by Miles Burton
~Book set aside in the past because it was hard to get into: Howard's End by E. M. Forster (2/27/21)

Things We Don't Talk About
~Book with the word "naked" in the title: Naked Came the Manatee: Dave Barry et al.
~Book by a politician
~Book about oppression
~Book about terminal illness

Drinking Game
~Cozy Mystery with beverage in the title: Murder at Teatime: Mysteries in the Classic Cozy Tradition by Cynthia Manson (ed)
~Book title that could be a drinking game
~Nonfiction book about alcohol
~Book with alcoholic beverage on cover: The Documents in the Case by Dorothy L. Sayers & Robert Eustace [wine] (4/24/21)

Shh...
~Book about secret societies/clubs: The Bookwanderers by Anna James (2/6/27)
~Children's book about bedtime
~Book with word "secret" in title
~Book with a peaceful cover: Fire in the Thatch by E. C. R. Lorac (4/30/21) [a murder with arson doesn't seem like it would have a peaceful cover....but it does]

Borrowing
~Book with a character from a different book: The Adventure of the Peerless Peer by Philip Jose Farmer [Sherlock Holmes with Tarzan--Lord Greystoke; as well as brief mention of other characters] (2/28/21)
~Fairytale/myth retelling in modern setting: A Wind in the Door by Madeleine L'Engle [angels & fallen angels] (5/7/21)
~Book by a pseudonymous author: Murder Goes to College by Kurt Steel [aka Rudolf Hornaday Kagey] (4/8/21)
~Book borrowed from library: Tinker, Tailor, Soldier, Spy by John Le Carre (2/20/21)

Bringing the World into Your Home
~Book about hygge, feng shui, or home harmony
~Book about taking in a stranger: Women Heroes of World War II by Kathryn J. Atwood [includes many stories of women taking Jews/refugees/downed servicemen and hiding them from the Nazis] (5/5/21)
~Book about a culture other than your own: The Sands of Windee by Arthur W. Upfield [gives a lot of information on Australian indigenous culture] (5/3/21)
~Book about how radio, television, or the internet has changed us

Weather
~Book with "snow" in the title: Crimson Snow by Martin Edwards [ed] (1/12/21)
~Book about weather-related disaster
~Book with picture of a clear, blue sky on cover
~Book that comforts you on a rainy day: The Boomerang Clue by Agatha Christie (2/21/21)

Those Bodies
~Book by celebrity known for body positivity
~Book with picture of the ocean on the cover: Look Behind You, Lady by A. S. Fleischman (5/1/21)
~Book with dead body on the cover: The Floating Admiral by The Detection Club (1/17/21)
~Children's book about body parts

TBR Burners
~Book on TBR pile for more than a year: The Talisman Ring by Georgette Heyer (1/19/21)
~Book someone gave you that you haven't read yet: Death of a Millionaire by G.D.H. & Margaret Cole (1/4/21)
~Anything you want: Magpie Murders by Anthony Horowitz (2/4/21)
~Book you're excited to read

Where You Sleep at Night
~Book about a hotel: The Cannibal Who Overate by Hugh Pentecost (2/14/21)
~Book with word "house" in the title: The Mystery at Orchard House by Joan Coggin
~Book with cabin on the cover
~Book about a haunted house
Ways to Die
~Book with "poison" in the title: The African Poison Murders by Elspeth Huxley (4/21/21)
~Book with a knife on the cover: An Ad for Murder by John Penn (4/18/21)
~True crime murder story
~Book about dealing with suicide: What Darkness Brings by C. S. Harris [several suicides involved--after-effects of most prominent dealt with by our protagonist] (4/11/21)

Make 'Em Laugh
~A funny comic or graphic novel
~Book about a comedian
~Book with a pun in the title: A Rogue of One's Own by Evie Dunmore (2/25/21)
~Book with someone laughing on cover

It's All Relative
~Book set in your grandparents' era: Princess Elizabeth's Spy by Susan Elia MacNeal (1/2/21)
~Book with word "father" in title: a Father Brown book
~Book you would share with your child: A Swiftly Tilting Planet by Madeleine L'Engle (5/8/21)
~Book about an estranged family

Putting 2020 Behind Us
~Book with a crowded cover: A Scream in Soho by John G. Brandon
~Book about self-care or recovery
~ Book with word "better" in title
~Book set after major world event (war, disaster, etc.)

The Tools of Writing
~Paperback book: Sidney Chambers & the Shadow of Death by James Runcie (1/14/21)
~Book with typewriter on cover
~Book with word "words" in title: My Own Words by Ruth Bader Ginsburg (2/13/21)
~Book with "deadline" in title

That Creepy Feeling
~Horror story or thriller: Uncle Silas by Joseph Sheridan Le Fanu (2/22/21)
~Book with insect on the cover
~Book about something that scares you
~Book with monster on the cover

Swashbuckling
~Book with sword on the cover
~Book about pirates: Dead, Man, Dead by David Alexander [wax figures of Blackbeard and his pirates are vital to the plot] (3/6/21)
~Rollicky adventure story:
~Book with map on the cover: Murdock's Acid Test by George Harmon Coxe [Dell Mapback edition] (4/199/21)

Favorites
~Book by your favorite author: Murder in 3 Acts by Agatha Christie [one of favorites] (3/25/21)
~Book in your favorite genre: Death & the Dutch Uncle by Patricia Moyes [mystery] (1/18/21)
~Book with your favorite color on the cover
~Book from a celebrity favorite list

Crossing Boundaries
~Book with an interracial romance: The Coconut Killings by Patricia Moyes [the initial main suspect--black and his white girlfriend] (3/22/21)
~Book about the immigrant experience
~Book about reconciliation
~Book about cross-dressing: The Left-Handed Booksellers of London by Garth Nix [Merlin, one of the lead characters likes to dress in both male and female attire] (1/18/21)

Picture This
~Book with "picture" in title: Star Trek The Motion Picture: Full Color Comic by Marv Wolfman [ed] (4/21/21)
~Book with photograph on cover: Star Trek The Motion Picture: The Photostory by Richard J. Anobile [ed] (4/21/21)
~Book by journalist or news photographer: The Lazarus Tree by Robert Richardson (4/2/21)
~An illustrated book: Dead as a Dodo by Jane Langton (1/24/21)

Generations
~Book about millenials
~Book about hippies
~Book about baby boomers
~Book about flappers: Murder at Bray Manor by Lee Strauss (2/21/21) [set in the 1920s; girl who was murdered was a flapper/"bright young thing"]