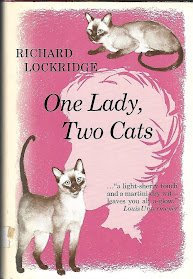 A charming memoir by mystery author Richard Lockridge about the challenges he faced trying to convince the lovely woman he'd fallen in love with to marry him. There were two major hurdles. First, Hildegarde (Hildy) Dolson didn't think she was the marrying kind. In fact, she'd written a whole magazine article (being a writer herself) about "Why I'd Make an Awful Wife." Second, Richard was most definitely a cat person. He shared his country home with two Siamese cats, Pammy and Sherry. Hildy is not a cat person. She doesn't have anything against them, but she definitely prefers dogs. There's a few more minor points involving her preference for New York City and her inability to cook--but convincing her that she really is the marrying kind and the marrying kind who can live with cats will be the real trick

Lockridge, in his pleasant, conversational manner, gives the reader an excellent view into the world of cats and just what they think and do when a new human comes along and distracts their own personal human from his most important duty--namely paying the right amount of attention to cats. His vignettes blend just the right amount of charm and interest and he manages to write about cats without making them too cute for words. Pammy and Sherry have distinct personalities which come shining through and, need I say, they soon win over the new lady in Richard's life.

This is a lovely and touching book--and it was just the kind of comfortable read that I needed on this last rainy day of January. ★★★★

First Line: Before I went south that winter I had, in passing, mentioned cats.

Last Line: We stood arm and arm and watched our cat coming home with her tail held high.