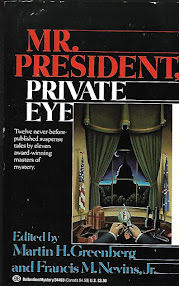 Greenberg and Nevins gathered up twelve stories featuring thirteen of our former presidents involved in murder and mayhem. While the title isn't really accurate--none of theses commanders-in-chief actually take to the mean streets as gumshoes, there are a number of mysteries to be solved. We begin with a story by Edward D. Hoch that begins with a secret left by George Washington in a dying message that isn't solved until Honest Abe comes along. Rutherford B. Hayes helps a Pinkerton detective get to the bottom of a murder and arson in the deep south and a housemaid with aspirations for the stage helps President Grant jail members of the Whiskey Ring. Grover Cleveland plays detective while on his honeymoon and brings a murderer to justice while foiling a few railroad robber barons' plans to undermine the union.

This is a pretty uneven collection of stories. Not quite the book of gems I anticipated when told on the back cover:

Quite a few of them aren't anything like clever; some are downright dull; and one didn't make any sense to me at all.

BUT...there are a few diamonds among the rhinestones. The Washington/Lincoln plot starts the collection off nicely. It was very nice to see Lincoln get the best of a traitor-wannabe. The story featuring Grover Cleveland is quite good with a tight little plot in short form. And the final two tales with Harry Truman and Gerald Ford really make plowing through the other stories worthwhile. Truman takes on a revenge killer who outwits the secret service and the Ford story reveals the "real" reason behind the former president's infamous clumsiness. It's quite satisfying to think that the KGB made such a huge mistake in the spying business.

Several of these stories are based on actual events (albeit playing fast an loose with the details) which gives us an interesting look at history. It's a shame that all of the stories weren't up to the standard of my favorites. ★★ and 1/2 for the collection.

I looked up Martin H. Greenberg on Wikipedia in order to link him up to the challenge page and couldn't believe how prolific he was ("he compiled 1,298 anthologies and commissioned over 8,200 original short stories"). So I had to check my shelf - I keep the anthologies all together - I have 8. I thought that was a lot.

Yeah, I've got quite a few anthologies that he edited or co-edited (14!)