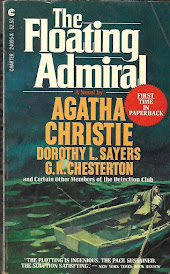 Admiral Penistone's body is found early one morning floating on the river. He has been stabbed to the heart and is adrift in the Vicar's boat. The previous evening he and his niece dined at the Vicar's, but they had used the Admiral's own boat to cross the river and return home. Why was the body found in the Vicar's boat? And where was he originally killed--for there are no blood stains at all in the bottom of the craft. Inspector Rudge is called in to discover whodunnit and why but runs across a myriad of half-truths, cover-ups, and missing witnesses. The Vicar obviously knows more than he's telling as do the niece and her fiance. Then it seems like everyone disappears on mysterious missions to London--the Vicar, the niece Elma, her fiance, and Sir Wilfred Denny, a neighbor who doesn't seem at first to have much to do with the crime at all. Who is the mysterious woman seen in the area on the night of murder and where has she gone? Why did Elma's French maid leave without collecting her final pay? Then there are the clues: an overcoat worn on a warm night, a second copy of a newspaper, a missing bit of the boat's mooring line, a secret file marked "X," and a missing weapon. Rudge has many (too many it seems to him) lines to follow and none of them seem to be leading anywhere definite. But he will get is man/woman in the end.

One of the first (if not the very first) collaborative detective novels written round-robin style among a group of detective novelists. Fourteen members of the The Detective Club settled down to tackle the mystery story. Each wrote a chapter after being presented with previous chapters from their colleagues and they were tasked with adding to (or in the case of Anthony Berkeley, presenting the solution to) the story without knowing what solution their predecessor/s had in mind. To ensure fair play (no adding things just make it more difficult), each author beyond the initial "setting the stage" chapters were also required to present their own solution to the crime based on the information given so far--including their own chapter.

I could tell while reading this that the club members had a great deal of fun with this. And it was great fun for this reader to watch them playing the game with each other. It understandably is not as smoothly written as it would have been had just one of them put the story together, but it works very well as a collaborative effort. Each author's style seeps in, but overall they manage to keep the tone and characters all of piece. I enjoyed this thoroughly when I first read it back in the 80s and I found it just as engaging reading it now. ★★★★

How interesting! I had heard of the Detection Club, but I guess I wasn't aware of exactly what they did. That's quite a cast of authors. The plot sounds interesting as well.

I've got this book somewhere around the condo (or possibly the garage). Had it for years and always been intrigued by it. I've got to find it and then find the time to read it.

Thanks for the review.

Gretchen: They didn't do a whole lot of these. Mostly, the club was a social club where they could talk "shop" and have an excuse to have a good dinner. :-)

Mark: If you find it and have a chance to read it, I hope you enjoy it!