Death of a Millionaire

Hugh Radlett had become one of the richest men in the United States through mining concerns. He retired from the mining business (quite young) and, after a separation from his wife--in which he settled plenty of money on her and their daughter--he disappeared. Nothing was heard of him for years until he turned up in London to arrange for new mining commissions with the Soviet Government. He met briefly with his contact in England, Lord Ealing, and arranged for a business breakfast at his hotel the next day.

When Lord Ealing arrives for his appointment, Radlett's hotel room is found ransacked with bloodstains on the bed and wall, but no millionaire--dead or alive. The body is nowhere to be found and Radlett's secretary, a Russian named Rosenbaum, is missing along with a very heavy trunk. An man found tied up in a cupboard, claims to be a witness of the murder and to have actually seen Radlett's lifeless body. What really happened in that hotel room? Is Radlett really dead? If so, what's become of the his body and why would the murderer drag it all over London in a trunk? And just who really is the murderer, anyway?

Superintendent Wilson and Inspector Blaikie will be led on quite a scavenger hunt--from London, Paris, Warsaw, Russian, and back again--before they get even close to answer. And they'll have to sift through witness that include Lord Ealing, the former Home Secretary, Norah Culpepper (a girl with nerves of steel) and her father the unfortunate eyewitness, and the dead man partner, the very charming and likeable Jack Pasquett. At one point it seems as though Wilson will be beaten, but he can't bear to leave a mystery unsolved and he's finally able to solve this one to his own satisfaction.

This was my first mystery by G.D.H. and Margaret Cole and it was a mixed bag for me. On the one hand I learned way more than I ever wanted to know about how minor or major events can affect the fickle ways of share prices. We get heaping helpings of the Coles' views on politics, big business, and the social strata of the 1920s. And it took longer to get to the good parts of the mystery than I would have liked. On the other hand, there are some laugh out loud moments--the bit about the fleet of specially-hired airplanes heading to France each following the other, for instance:

The first was one of your men, Inspector Blaikie. The second was a Mr. Wharton, then came another of your men, Detective-Sergeant Slocombe. The fourth was Lord Ealing. He left half an hour ago, with Sergeant Merrilees close behind him. 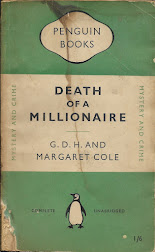 The solution was quite a neat one too--especially when one keeps in mind that it's a very early example the type. The last few chapters are gold. I do wish the entire book had been equally engaging. ★★★

Last lines: "It's only that I'm not civilized, and you are. Upon my word, Arthur, I'd do it again!" [redacted because spoilers] laughed in Arthur Wharton's face.

Deaths = one [it'd be a spoiler if I told you how, though]

I had my first taste of the Coles (End of an Ancient Mariner) a couple of months ago and had a pretty similar experience. Some nice moments but pretty dry. Like this, that one ended strong too.

I have only read one of their books, The Man in the River and I was bit in the middle with it too. I have the title you reviewed in my TBR pile, so it may be staying there for a while longer now lol

Hmmm. I may have to move my other Coles book up the stack--just to see if the trend continues. I was kind excited that I was going to read the book I used for my logo on the "Who Wants to Murder a Millionaire?" quiz. I wish the whole thing had been as good as the ending...