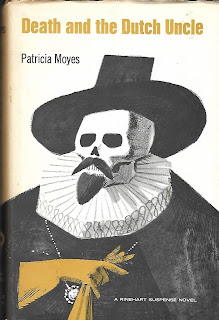 Death & the Dutch Uncle (1968) by Patricia Moyes opens just after the murder of a small-time gambler and crook. The shooting occurred in the gents in the private bar at the Pink Parrot--a meeting place for various members of the British crime scene which has somehow managed to steer just to the right side of the law. Nothing can ever be proven against anybody--not against the owner nor the patrons. And, of course, true to form, nobody saw or heard anything when "Flutter" Byers lost his last gamble. Superintendent Tibbett is annoyed by the blank innocence that greets the investigation, but there is little to be done when a whole roomful of people all claim to have been unaware of what happened. It seems that Flutter's murder is destined to be an unsolved crime.

But a then dinner with a man who works as an interpreter for an organization (PIFL) that handles international disputes over boundaries and the like makes Tibbett realize that Flutter had gotten mixed up in a very high-stakes game indeed. It soon becomes apparent that someone has been killing off members of the committee which will decide the boundary line between two obscure African countries. And they have their sights on a final member who holds the deciding vote. What can be so important about a barren piece of land in Africa? Why does Tibbett have to go to Amsterdam to look for the solution to the case? And...will he be in time to save the man in the crosshairs?

This is a fun mystery that does take a fair amount of suspension of disbelief. There are a number of coincidences; Tibbett's taking Emmy along straight into danger is a bit much; and the gentleman from PIFL deserves a bigger dressing down than he gets for deliberately losing his police guardian. But--if you're looking for an escapist read and an enjoyable time following Henry Tibbett as he ferrets out exactly who's behind it all, then this is a quite decent afternoon's read--fast moving (especially after the action moves to the Netherlands) and interesting.  ★★★

First Line: The hospital was exactly like any other hospital--green and white and hygienic and profoundly depressing under a vneer of brisk jollity.

Followed you over here from Cloak & Dagger 2021 challenge.

The title drew me in. Death and the Dutch Uncle, sounds like a fun escapist read alright. The best part was the counter at the end for "Deaths = 3 (one shot; one hit by vehicle; one poisoned)". Do you do this for all your reviews? It's great! :-D

Lex: I just started the death count in my murder mystery posts in the last couple years. One of the challenges I do (called the Medical Examiner Reading Challenge) is based on number of deaths (and what kind) in mysteries. So, I keep a running total for my review and can easily turn the number in for the challenge. :-)