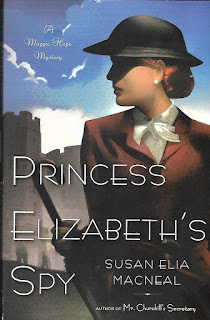 This is the second book in the series and continues to follow the war-time adventures of Maggie Hope. Since first working as a typist for Prime Minister Winston Churchill, Maggie has wanted to break into the ranks of intelligence work. We open with Maggie trying to pass the physical tests that will enable her to be a full-fledged member of the spy network after passing the intelligence tests with flying colors. She's disappointed when the powers-that-be determine that her abilities aren't up to the job--to put it bluntly, they don't think she'd survive encounters with the enemy.

She's sent back to London where Churchill comes up with a job that he believes she will be perfect for--maths tutor for Princess Elizabeth. Maggie is insulted--they've agreed that she's got the brains for spy-work and they're sending her to babysit. But it turns out it's a much more dangerous job than teaching algebra to the young princess. There's a Nazi plot afoot that would see King George VI dead and Princess Elizabeth kidnapped and it appears that there's a spy at work within Windsor Castle. Maggie's real mission will be to unearth the spy and foil the Nazis before any of the royal family are harmed. It becomes even more urgent when one of the ladies-in-waiting is murdered--was she the intended victim or did the murderer miss the target?

I keep thinking that I'm going to like this series more than I actually do when reading it. I mean--I thought it so much that I've bought up every book in the series that has become available through our Friends of the Library used bookstore. I like Maggie very much. She's a feisty heroine who's certain she can keep up with the boys and certainly puts a few of them in their place (I love how she deals with her handler, ladies' man and very full of himself, Archie Nevins). The characters are probably the most appealing part of this series and I'll probably keep reading to see how things develop with them. When I reviewed the first book (Mr. Churchill's Secretary), I said that I looked forward to Maggie finding her feet and getting settled in her work. I guess I'm still looking forward to that...because I don't feel that the series has "settled" yet. There's not anything in particular I can put my finger on, but it hasn't made it out of the realm of "decent historical mystery"--I hope it will in future installments. ★★★

First line (Prologue): The midday summer sun in Lisbon was dazzling and harsh.

Last line: "Elise Hess. I'll be taking care of you while you stay with us."

Deaths = 3 (one shot;  one beheaded with wire; one drowned)

I agree with you on these, Bev. I haven't continued on with the series. I also felt like I should like this series more than I did. I had read some really great reviews. I'll be interested to see what you think as you go on.

I'm glad to know it's not just me. I've got a whole slew of these waiting on the TBR piles...I don't know how far I'll go with them, though.

I was very intrigued by the description but a friend I trust said it was full of anachronisms that made her crazy.

I find that with historical mysteries I lose patience with that type of sloppiness. I am actually in the process of reviewing a book for Publishers Weekly and it is set right after WWI and on page 2, the author used the word 'clueless' twice. Now, it might have been used casually during WWII but its current usage was not common until the mid 1980s. It shouldn't take a brain surgeon to avoid slang that is not contemporary!

I am enjoying a series by Iona Whishaw that is set in Vancouver. Have you tried that?

CLM: No, I haven't tried that series. I have also been reading C.S. Harris's series set in Regency England. Those are very good.


I just read a book about Bletchley park for my first historical fiction. I haven't read Mr. Churchhill's Secretary yet, glad you mentioned that.

I haven't read this series yet, but I do love the cover!