Murder in the Calais Coach 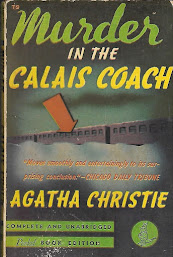 I am currently trying to reread all of Agatha Christie's detective fiction in order of publication--something I have never done and have long wanted to try. When I first discovered her mysteries, I simply read them as I found them and didn't really pay attention to when they had been published. Some of her work I have read once and then never returned to--whether because I didn't like the particular plot as well or because I initially read it from the library and just hadn't added it to my personal collection. Others, such as this one, I have read and enjoyed many times. Some of these novels I can reread and her tricks still work on me if it has been long enough since the previous read--my memory gets more sieve-like as the years go by. Some are what I consider the "big" novels--where the solution is such that I would need to suffer from complete reading amnesia to be fooled again. This is one of the latter.

I last read this (under the Orient Express title) in 2015 and reviewed it in full at that time. For a much more in-depth look at my thoughts on the plot as well as on various formats (I had a regular train murder party--I read the book, listened to an audio version, and watched two filmed versions), please see the link above. This year's reading was pure indulgence. I didn't think deep thoughts about the plot or examine Christie's methods of clueing or look at all the subtle hints that were oh-so-obvious this time around (and think why on earth didn't I catch that when I read it the first time?). I just enjoyed watching Poirot do his thing and let his little grey cells do the work. I also had a running film going in my head with Suchet as Poirot (but not being so overly intense in his whole weighing of the guilt and justice thing as happens in his filmed version) and with the rest of the cast of characters as played in the 1974 movie. ★★★★★ every time I read it.

First line: It was five o'clock on a winter's morning in Syria.

Last line: "Then," said Poirot, "having placed my solution before you, I have the honour to retire from the case."

Deaths =  4 (one shot; one natural--died in childbirth; one fell from height; one stabbed)