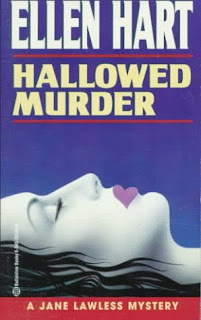 This is the first in the Jane Lawless series of mysteries and the second that I've read. I picked this one up because, set at a sorority house at the University of Minnesota, it has an academic flavor and I can't resist those. Jane is serving as an alumna advisor to her old sorority, Kappa Alpha Sigma. Early one morning, she and her BFF Cordelia Thorn discover the body of one of the members drowned in a nearby lake. It's revealed that the young woman had been in a relationship with another female student after a breakup with a boyfriend. The police are ready to call it a suicide by someone "pretty mixed up in the head," but Jane isn't buying it. She didn't know Allison Lord intimately, but she had gotten to know her through her work with the sorority's student governance board and she didn't see Allison as the suicidal type. More apt to take her problems head-on.

In addition to the death, there are other mysterious things going on at the house--from thefts to shadowy figures at the windows to blackmail. And then the sorority's rituals room is ransacked--which means someone with access to the keys must be involved. As Jane starts to ask questions, her attention is drawn to the boyfriend in the case, Mitchel Page. Not only was the break-up bad, he works as a busboy at the sorority house and seems to have free rein within its walls. But he's not the only suspect. Gladys the housekeeper seems to know more secrets than average and Jane's fellow advisor, Susan Julian has been very vocal about her views on homosexuality. Even Adolf, the cook, has been acting a bit strangely since Allison's death. When Mitchel dies a few days later, Jane begins to see the pattern but has no evidence to give the police--so she and Cordelia (very much against Cordelia's better judgment) lay a trap for the killer a Jane's lonely lodge. They should have listened to Cordelia's better judgment...but the killer is caught in the end.

Ellen Hart writes a very middle-of-the-road mystery. At least in the two books I've read. The plot is okay. The motive is a bit overworked. But the clues are on display and ready for the taking if readers are astute enough to catch them. The best part of the book is the snapshot of the late 80s. The opinions and prejudices of the time are definitely represented--not that they're very palatable, but it is good to remember where we've been. I do like Jane and Cordelia and their friendship. Cordelia is a little over-the-top, but we all have that one friend who is, don't we? ★★★

Last Line: "I don't think he'll be any trouble. His name is Lucifer."

Deaths = 3 (one drowned; one froze to death; one heart attack)