If you haven't read the previous books in the series, then there are spoilers ahead. Spoilers about the life of Sebastian St. Cyr, Viscount Devlin, that is. So...if you want to read the series and have the background story unfold for you, you might want to wait to read my review. 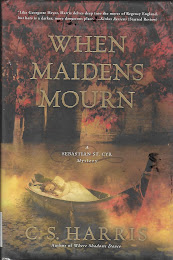 In book six, Devlin had finally persuaded Hero, the soon-to-be mother of his child, to marry him. Of course, Hero, being the strong-willed young woman she is, made the match for reasons of her own. Now the two are working on just what their marriage will be...and just how much they really mean to each other. They plan to escape the heat of London and spend their honeymoon in the country when Gabrielle Tennyson, one of Hero's friends, is found stabbed to death at an antiquary dig at Camlet Moat. Gabrielle firmly believed that Camlet Moat was the site of the original Camelot--the background source for the Arthur legends.
Her work as an antiquary riled her male colleagues, but were they upset enough to resort to murder? Or is there a deeper plot afoot? When it is discovered that Gabrielle's two young nephews are also missing, it begins to look like there's more than scholarly jealous at work. Hero and Sebastian each take an interest in the case--sometimes working at cross-purposes and never fully confiding in each other. Especially when circumstances involve Hero's father, Lord Jarvis (sworn enemy to Devlin) or Sebastian needs to consult his former lover, Kat Boleyn, about French spies. But the information they gather will need to be pooled if they are to discover the killer before it's too late for the boys. They may also learn some uncomfortable secrets about Lord Jarvis and Sebastian's past along the way.
Harris has given us another fine historical mystery. I've enjoyed watching the relationship between Hero and Sebastian grow and look forward to seeing where it goes next. The mystery aspect is really well done with a good range of suspects and red herrings to keep the reader occupied and looking for the culprit. I also liked the way she brought in Arthurian legend as well as the family of the (later) Poet Laureate of England, Alfred Lord Tennyson, though she did take some liberties with the number of family members. It was a nice change to get away from the more politically charged plotline and delve into one with a more literary background. A highly enjoyable read. ★★★★
First Line: Tessa Sawyer hummed a nervous tune beneath her breath as she pushed through the tangled brush and bracken edging the black waters of the ancient moat.
Last Line: And he raised his head to meet her kiss.
*************
Deaths = 5 (three shot; one stabbed; one hit on head)
Posted by Bev Hankins at 10:06 PM

No, I haven't read this series before, but heard good things about it. I just scrolled to the end to see the death count -- morbid, but it's kind of fun to see the turnover, haha. I do love the title, though and a wonderfully historical effects cover. Thanks!
~ Lex (lexlingua.co)

Lex: I started this series back when it first came out and then other books grabbed my attention. I just recently started rereading and working my way through those I hadn't gotten to the first time. I didn't remember there being such a high body count...but it's a very good series.