Dead as a Dodo 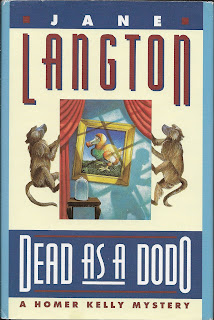 When Homer Kelly and his wife Mary leave Harvard behind for his appointment as a visiting fellow at Oxford, they thought he had left his role as part-time detective behind as well. But it isn't long before before the British scholars prove just as adept at making mysteries for their American visitor. When people in college begin dying, Homer (whose reputation as sleuth in scholar's clothing has preceded him) is asked to take a hand. And, of course, the Oxford police don't mind this Yank nosing about in their business.  They welcome him with open arms.

So, Homer dons his deerstalker and begins delving into the deaths. First, a night watchman plunges to his death from a glass-topped roof. Why on earth was he crawling about up there? And how on earth did he get there? Then Dr. Helen Clare's argumentative husband takes a similar plunge down a staircase that isn't all there. It had been blocked off for repairs but who removed the barricades and turned off the lights? Then a lovelorn priest who may have been in the process of losing his faith as well as his girl appears to have committed suicide. But what was Hal Shaw, a just-married tutor in biology, doing in the Reverend Oliver Clare's rooms that night? And what does it all have to do with Charles Darwin, some missing specimens from his famous voyage, the great-great-great-great granduncles of Oliver Clare, a stolen painting of a dodo, Alice & Wonderland and Lewis Carroll, and the steeplejack's missing lines and tackle? Homer must help Inspector Mukerji answer all those questions before they can track down the culprit.

Or at least that's what the synapsis is supposed to be. Quite honestly, this is one weird book. The story has Darwin and Alice & Wonderland themes running all through it that are, one surmises, supposed to be relevant and make sense. But they don't. At least not me. In the middle of it all Homer has these bizarre dreams (both the kind while sleeping and the walking around daydreaming kind) mixing the mystery plot up with Carroll's world. I felt very much like Alice when she meets the caterpillar... 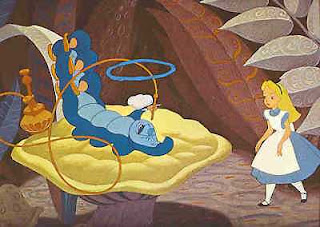 ...like Homer (or possibly Langton) had been puffing on one of those hookahs. I get the sense that these Carroll references are supposed to be clever and/or witty, but they strike me as neither.

After wading through all the Wonderland nonsense (and I like Lewis Carroll's work, mind you), I get to the solution. And that, I must say, was a disappointment. I'm not buying the motive (such as it is)--especially not in the late 1990s. Not having been told otherwise, I presume the story takes place about the time that it was published--and I just don't believe that that reasoning works, particularly given who gets killed. Now, if the [redacted--it's a spoiler, highlight empty space if curious] bishop had been killed, then I'd be better persuaded that the person who did it had the motive given. I could see a certain parallel logic, albeit a bizarre logic [quite in keeping with the whole bizarre nature of the book, though].

Overall, a disappointing read. I love me an academic mystery and I was looking forward to one set in Oxford. I have read a few of Langton's Homer Kelly books previously and while they also had an unusual tone, they seemed to be more in the line of Michael Innes' unusual works. I enjoyed both in the past. However, there are a horde of people on Goodreads handing out four and five star ratings, so your mileage may vary. ★★

*And, if anyone reads this fairly soon (while the details are still fresh in my mind) and can tell me what's significant about what Homer sees when he looks out Oliver Clare's window I would love to be enlightened.

First Line: When Homer and Mary Kelly came to Oxford that October, they were not the only new arrivals.

Deaths= 5 (two fell from height; one stabbed; one shot; one hung)