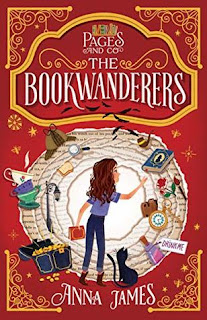 I'm sure I don't have to tell you two how powerful books are. Books can change minds and change worlds, open doors and open minds, and plant seeds that can grow into magical or even terrifying things. Stories are things to be loved and respected at the same time, never underestimate the power of them. It's why books are often casualties of censorship; those who ban or burn books are those who are scared of what can be found among their pages. (Amelia, the Under Librarian)

The Bookwanderers (2019) by Anna James

Tilly Pages has lived under the mystery of her mother's disappearance when Tilly was a baby. Her father had died before she'd been born and her grandparents, with whom she had lived her whole life, would never tell her much. Every time she asked questions, they managed to quickly change the subject. Living in her grandparents' bookshop (Pages & Co.), it was natural that she would turn to books for comfort--especially after moving on to middle school and finding that her best friend had apparently moved on to other friends once she joined the net ball team.

Soon, she isn't just getting lost in the stories for comfort--she's amazed to find characters from her favorite books, like Anne of Green Gables and Alice from Wonderland appearing in the bookshop. And it's not just her favorite characters...she stumbles upon her grandma with a woman called Lizzie (Elizabeth Bennett from Pride & Prejudice) and her grandfather in deep conversation with a man who looks suspiciously like Sherlock Holmes. She's not sure what exactly is going on and then before she knows it Alice has taken her for a visit in Wonderland.

In between these unusual adventures, Tilly has started a friendship with a boy from her school named Oskar. When she tells him about her experiences, he's naturally a little skeptical. Especially, knowing that she's recently found a box of books that used to belong to her mom. He wonders if it isn't just a bit of daydreaming on Tilly's part. But then Anne shows up while he's in the bookshop with Tilly and takes both of them to world of Green Gables. After they get back, they decide it might be a good idea to have a talk with Tilly's grandfather.

They learn that they have become bookwanderers--readers who read books so intently that they can actually see the characters and visit their worlds. But there are dangers involved with being a bookwander and Mr. Pages takes them to meet the Under Librarian and for a full initiation into their powers. More for their safety than anything. Before their initiation is complete, Tilly finds that she has powers even more unusual than most bookwanderers and that there is a threat that not even the Under Librarian knows about. And somehow it's all connected to her mother's disappearance so many years ago. Will she and Oskar be able to solve the mysteries involved and get back safely from their fictional wanderings?

This a delightful middle-grade book about literary adventures which is perfect for those who love books. It weaves themes of friendship, loss, love, and reality into a interesting and exciting story that kids of all ages (even those over 50 😉) can enjoy.  James also does an excellent job giving voice to Anne, Alice, and Sarah Crewe from A Little Princess. Their conversations with Tilly and Oskar are very true to character and it's interesting to see how they react to Tilly's world and Tilly's & Oskar's reactions to the worlds of fiction. The final twist at the end shouldn't have been unexpected...but it still managed surprise me and it makes me wonder if it will be followed up in the next book in the series. ★★★★ and 1/2.

Wow! This sounds like a delightful literature-infused adventure. I'll be adding it to my ever-growing need-to-read list!

I read this recently when my 6th grade niece recommended it. Lots of fun and I can see why Captain Crewe became a romantic figure!