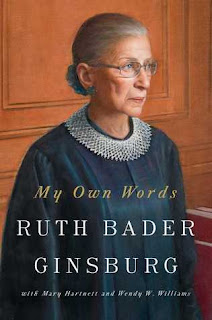 [from the book flap] My Own Words offers Justice Ginsburg on wide-ranging topics, including gender equality, the workways of the Supreme Court, being Jewish, law and lawyers in opera, and the value of looking beyond U. S. shores when interpreting the U. S. Constitution. Throughout her life Justice Gingsburg has been a prolific writer and public speaker. This book's sampling is selected by Justice Ginsburg and her authorized biographers Mary Hartnett and Wendy. W. Williams.....This is a fascinating glimpse into the life of one of America's most influential women.

Ruth Bader Ginsburg was, in a word, amazing. The Supreme Court and America lost someone most nearly irreplaceable as a human can be when she left us in September 2020. This is made even more glaringly obvious [in my opinion] by the shoddy replacement given us by the previous administration. Justice Ginsburg came to the highest Court in the land with roughly 30 years of experience in law. She had written briefs for ACLU cases brought before the Supreme Court; she had served on the U.S. Court of Appeals. She had, as they say, been in the trenches. She brought to the bench a thorough understanding of law, a broad knowledge of cases that had come before, and a real desire to provide impartial justice. Impartiality is an absolute necessity for justice. Judges should not be placed on the bench out of political one-up-manship or to serve a particular party's agenda. She believed (as did Chief Justice Renquist before her that Justices should be "bound to decide each case fairly, in accord with the relevant facts and the applicable law, even when the decision is not the one the home crowd wants."  [I'll get off my soap box now.]

This book was a terrific look at Justice Ginsburg's background, her thoughts, her beliefs about the way justice is best served, and what it means to have gender equality:

Feminism...I think the simplest explanation, and one that captures the idea is a song that Marlo Thomas sang, "Free to be You and Me." Free to be, if you were a girl--doctor, lawyer, Indian chief. Anything you want to be. And if you're a boy, and you like teaching, you like nursing, you would like to have a doll, that's OK too. That notion that we should each be free to develop our own talents, whatever they may be, and not be held back by artificial barriers--manmade barriers, certainly not heaven-sent.

Through speeches, lectures, briefs, and Supreme Court dissents, we get the messages direct from Ginsburg herself. I don't listen to a lot of audiobooks, but this is one that I would love to listen to--to hear the portions read by Justice Ginsburg herself and to truly hear it in her own words. She promised in her speech accepting President Bill Clinton's nomination to the Supreme Court to work "the the best of my ability, for the advancement of the law in the service of society." I believe she did just that. I would have liked a bit more of her own words about Justice Ginsburg to balance with the sometimes repeated words about a few of the court cases. But on the whole an interesting and absorbing work. ★★★★

Yes, she sure was amazing. I forgot that she wrote this book. I haven't read it but will definately put it on my TBR list.