The Adventure of the Peerless Peer 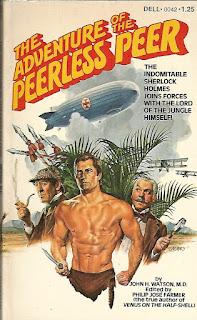 The Adventure of the Peerless Peer (1974) by Philip José Farmer

It is 1916 and Holmes and Watson are called upon once again to save Britain. This time they must track down Von Bork before he can unleash a dreaded plague upon the world--bacteria that can devour a good Englishman's favorite food, boiled beef and potatoes. Forced to fly for the very first time (and they both hate it), they track the evil villain to darkest Africa where they form an uneasy alliance with the Lord of Jungle. Will they escape the African tribe bent on making them sacrifices? Will they escape the venomous cobra? Will they discover where Von Bork has hidden the secret formula? Will Watson get married for a fourth time? Will these adventures be enough to keep the reader interested....?

I thought The Veiled Detective by David Stuart Davies was the worst Holmes pastiche out there. I would be wrong. When I found this book by Farmer, I thought it looked like a fun mash-up between Holmes and Tarzan (Lord Greystoke). I've enjoyed several short stories and novels by Farmer in the past and expected a rollicking good adventure if nothing else. What I got was one of most incredibly awful parodies of Holmes and Watson and Tarzan possible (though I'm less solid on Tarzan--having not read much by Burroughs). I'm quite sure Farmer thought he was being hilarious with what passes for humor herein and maybe in the 1970s it was. But reading this at my age in 2021--the "humor" is sophomoric at best and insulting to the Holmes and Watson characters (and the reader) at worst. The only reason I give this one star instead of none is that I did enjoy playing "spot the character" for other fictional characters who pop up along the way. John Dickson Carr's Dr. Fell and Henry Merrivale, H. Rider Haggard's Allan Quartermain, and others make appearances or are mentioned in the narrative. There is even a reference to the world of Dorothy L. Sayers' Lord Peter Wimsey when the Duke of Denver is discussed. ★

~As a matter of trivia, I think it interesting that Farmer (or Dell Publishing) was able to use Nigel Bruce's image as Watson and what looks very like Ron Ely as Tarzan, but I'm not recognizing the Holmes figure. It certainly isn't Basil Rathbone--one of the most iconic Holmes.

First line: It is with a light heart that I take up my pen to write these the last words in which I shall ever record the singular genius which distinguished my friend Sherlock Holms.

Last line: "I am making some observations upon the segregation of the queen."

I have a copy of this but have never read it. I always thought the same about the portraits on the cover. I'm sure that the model used for Sherlock is Nicol Williamson who played the great detective in The Private Life of Sherlock Holmes back in 1970. Very similar to that actor as he appears in the movie.

John, unless you want to play "spot the character," you really won't miss much if you don't ever read this one.