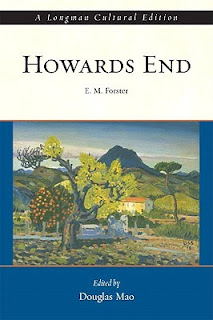 The narrative concerns the relationships that develop between the imaginative, life-loving Schlegel family--Margaret, Helen, and their brother Tibby--and the apparently cool, pragmatic Wilcoxes--Henry and Ruth and their children Charles, Paul, and Evie. Margaret finds a soul mate in Ruth, who before dying, declares in a note that her family country house, Howard's End, which has been the family's connection with the earth for generations, should go to Margaret. Her survivors choose to ignore her wishes, but after marrying Henry, Margaret ultimately does come to own the house. In a symbolic ending, Margaret brings Henry back to Howard's End after several traumatic events have left him a broken man. [Previous portion of synopsis courtesy of Britannica] Woven into this drama is a second storyline involving a poor clerk, Leonard Bast, and his "wife." Leonard becomes acquainted with the Schlegels and much of the trauma in the story emanates from Leonard's relationship with various other characters.

So much drama and dreariness. Leonard Bast and his yearning for culture while dealing with the "wife" he managed to pick up somewhere. Helen and her "secret." The relationships with and among the Wilcox family. So much contradiction--on one page Mr. Wilcox declares that he's going to give Howard's End to his son--but no one shall live in. Not many pages later, he's giving it to his wife absolutely. On one page Margaret will never forgive her husband and is going to Germany. Just a couple pages later, she's learning to love and understand him more each day. Of course, there is more time involved  between those incidents than a couple of pages would seem to indicate. But that, in a nutshell, represents one of my biggest difficulties with Forster's story--he skips through time like nothing and doesn't even use "* * * *" to indicate that time has passed. I constantly felt like I was on the deck of a ship in very rough waters--never knowing if I would be making steady progress in a straight line of would suddenly find myself reeling towards the railing.

I've seen many reviewers comparing Forster to Jane Austen. I adore Austen--her comedy of manners, her wit, and the relationships she represents in her novel. Her work sparkles with humor and human interactions that ring true. Even Emma (my least favorite of the novels I've read) didn't drag the way this did. It's possible that I'm coming back to Forster too late in life (I read A Room With a View in college and loved it) because neither A Passage to India (read in 2019) nor Howard's End have impressed me as much as I feel they should have. Howard's End speaks to class differences in early 1900s England and since I find the Victorian era through World War II to be the most interesting period I would think I would have enjoyed this thoroughly. Unfortunately, I didn't. ★★★

First Line: One may as well begin with Helen's letter to her sister.

The affections are more reticent than the passions, and their expressions more subtle. (p.8)

Last Line: "We've seen to the very end, and it will be such a crop of hay as never!"