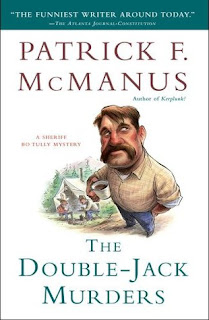 The Double-Jack Murders (2009) by Patrick McManus

Sheriff Bo Tully has quite a bit on his plate. And it's not just the barbeque from the big shindig that kicks off the first chapter. A crazy killer has escaped, vowing vengeance on the lawman who was silly enough to try and put him behind bars (that would be Tully). He's also taken on a 75-year-old missing persons case that most likely ended in murder. His good friend Agatha Wrenn has asked him to look into the disappearance of her father and his assistant. The two were a pair of gold miners who disappeared just when it was rumored they had found a huge vein of gold in Blight County. Agatha's mother always told her that her husband Tom Link wasn't the disappearing kind, so Agatha grew up assuming he and Sean had been murdered. And now she wants to know for sure.

Tully doesn't mind digging around in old (really old) mysteries, especially when it will suit his purposes for flushing out Lucas Kincaid--the killer on his track. So he loads up his ex-Sheriff father Pap and a tracker by the name of Dave and the three head out to Deadman Creek for a little camping, a little gold mine hunting, a little ancient murder solving, and...to set himself up as bait for Kincaid. He's also got the best shot in the sheriff's office, Deputy Brian Pugh on tap to play sharpshooter and pick Kincaid off if he tries anything. Trouble is...after Kincaid has two tries at killing him things go silent. No more evidence of Kincaid and, more troubling, not one peep out of Pugh. Did Kincaid give up that easily? Did he get Pugh first and decide that a dead deputy was as good as a dead sheriff? Just how man murders will Tully wind up solving after all?

The beginning of this one gave me déjà vu. I am quite sure that I have never read a Patrick McManus mystery before, but that whole beginning where Sheriff Tully installs his deputy in the upper floor of his house with a scope rifle to watch out for a mentally unstable escaped killer with Tully on his hit list seemed awfully familiar to me. I'm not so positive about the whole barbeque in his "front yard" (the sprawling meadow around his house), but the deputy with the rifle--yes.

Anyway...this is a decent, fast read. I didn't find it nearly as hilarious as the blurbs on the cover seemed to think I would:

The Funniest Writer Around Today (or at least in 2009)

I mean sure if you like your humor laced with macho self-appreciation or jokes about killing people (at least I think they're joking) or shooting in general or all men loving trucks--then, yeah, this is a rollicking yuck-fest. But for those of us who aren't all that keen on jokes about guns/shooting/killing and etc.--not so much.  It wasn't offensive--just not funny. The primary mystery (the missing miners) wasn't too difficult to figure out. I didn't get the slight twist, but I did recognize the motive and have it attached in the general direction. ★★★