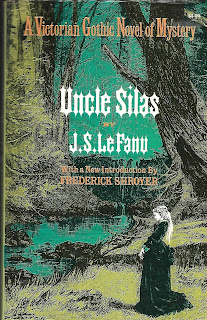 When Maud Ruthyn's loving but remote father dies, she is placed in the "care" of her Uncle Silas. True to form, she has inherited quite a bit of property and money and if she dies before reaching her majority guess who gets to scoop the pot? Good ol' Uncle Silas. She's been put under the thumb of an intimidating and kindof nutty French governess and we learn that Silas has been involved in a previous mysterious death. He is a small menacing presence rather than a large, overbearing villain. The whole household under Silas, including his ghastly son, are on the weird and threatening side and Maud feels danger from nearly every direction. Fortunately, she makes a few steadfast friends among her father's household servants and a cousin Lady Knollys (Monica) who see her through the worst of her trials. She undergoes frights and threats and there is a final midnight attempt on her life which lends itself to explaining the earlier death.

Of course, Maud Ruthyn tells her story of Gothic horror from a place of safety, years later after she is married to the charming Lord Ilbury. Having her tell the story in the first person takes quite a bit of the suspense away. I mean, if Maud can tell us this story we know she survives her ordeal, right? I'm afraid that the suspense just didn't hold me as well as it might have done if this had been told from a different perspective and there had been any possibility of doubt about the outcome. Le Fanu did his best to give the reader proper Gothic shivers and (when one could forget who was telling the story) was fairly successful. An interesting Victorian thriller with an air of mystery and suspense, though for preference, I would take his shorter ghost stories over this longer novel.  ★★★

First Line: It was winter--that is, about the second week in November--and great gusts were rattling at the windows, wailing and thundering among our tall trees and ivied chimneys--a very dark night, and a very cheerful fire blazing, a pleasant mixture of good round coal and spluttering dry wood, in a genuine old fireplace, in a sombre old room.

Last Lines: This world is a parable--the habitation of symbols--the phantoms of spiritual things immortal shown in material shape. May the blessed second-sight be mine--to recognize under these beautiful forms of earth the ANGELS who wear them; for I am sure we may walk with them if we will, and hear them speak!

Deaths = 4 (one natural; one stabbed/throat cut; one hit with hammer; one poisoned/overdose)

I read this some years ago with the Brontë Reading Group in Brussels. I really liked it. We also read another story, shorter, by Le Fanu, called Carmilla, about a female vampire. It was rather good as well.
Sometimes you are really surprised by these old authors who seem to have slipped away from the current stream of reading. Le Fanu is definitely one to remember.

Uncle Silas was expanded - and moved from Ireland to England - from a short story, "The Murdered Cousin". There was a fine TV adaptation with Peter O'Toole doing a carpet-chewing performance as Uncle Silas.

Lisbeth: I really enjoyed Carmilla. It's been quite some time since I've read that one, though.