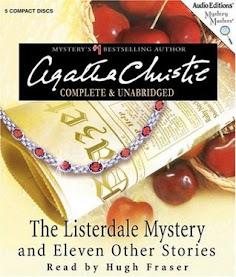 The Listerdale Mystery (1934) by Agatha Christie is a collection of twelve short stories--none of which feature Hercule Poirot, Miss Marple, or any of her other repeated characters. They include stories of mistaken identity (mostly on purpose), stolen jewels, exploits on trains, mysterious butlers, missing lords, and fake policemen. Quite a number are fairly unbelievable adventure stories ending with rapid romance. There are a few murders thrown in for interest and some of the stories remind me most of the Harley Quin style of plot. Entertaining enough for an afternoon or two of listening (I listened to the audio version read by Hugh Fraser), but most are not Dame Agatha's best work. My favorites are "Philomel Cottage," "Accident," "Jane in Search of a Job," and "Swan Song." ★★★

"The Listerdale Mystery": A gentlewoman in reduced circumstances is offered the chance to live in a beautifully appointed home for a nominal rent. She takes advantage of it for the benefit of her daughter--whom she hopes to see engaged to a more affluent young man. Lord Listerdale has disappeared under mysterious circumstances--leaving the home open for let--and Mrs. St. Vincent's son is certain there is something fishy about the whole set-up and decides to investigate.

"Philomel Cottage": Alix Martin marries a man after a very brief acquaintance. After a few odd conversations, she begins to suspect her husband of harboring secrets from her. Possibly deadly secrets.[Made into a movie called "Love from a Stranger" starring Basil Rathbone in 1937.]

"The Girl in the Train": George Rowland is fired by his uncle too many nights out late carousing. He decides to go on a train journey and encounters a mysterious young woman who begs him to hide her from her uncle. She then sets on the road to more adventures...and romance and wealth.

"Sing a Song of Sixpence": While on a sea voyage, Sir Edward Palliser made a promise to a young woman that if she ever needed help then she could come to him. He's rather surprised when several years later, she does. Someone has murdered great-aunt and she wants him to find out who did it. You'll not be surprised to know that he does.

"The Manhood of Edward Robinson" begins with Mr. Robinson reading a story of a heroic young man getting into all kinds of daring adventures and being kissed by mysterious young women. Mr. Robinson is engaged to a rather managing young woman who wants him to be practical and save money for their marriage. He wins a tidy little packet that allows him to buy himself the motor car of his dreams...and he has an adventure of his own which sends him back to his fiancee a changed man.

"Accident": Retired Inspector Evans is sure that he recognizes a woman in the village as one who was acquitted of poisoning her previous husband. He's pretty sure she was guilty and that she's planning on polishing husband number two as well. While he's still debating what to do about it, he visits a fortune teller at the local fete who tells him to be very careful. He is about to make a decision that could be life or death...and if he makes a mistake there will be death. This is one fortune teller who earns her pay....

"Jane in Search of a Job": Jane Cleveland is badly in need of a job. She spies an advertisement in the paper looking for a young woman who looks quite like she does and who speaks French (which she does). It winds up being a position to pose as a double for the Grand Duchess Pauline of Ostrava. There may be danger...but what's a little danger when three thousand pounds are in the offing?

"A Fruitful Sunday": A working couple with dreams of better things take a holiday in the country. When they stop by a fruit stand and buy a basket of cherries, they get more than they bargained for. In the bottom of the basket is a gleaming necklace which looks exactly like the one recently written up in the newspaper as having been stolen. What should they do? Dorothy is all for coaxing Edward into finding a fence and getting some money for the thing. After all--they didn't steal it.

"Mr. Eastwood's Adventure": Mr. Eastwood is a mystery writer in need of a plot. He's got a perfectly good title ("The Mystery of the Second Cucumber"), but that's all he's got. He's got no mystery. Well...that is until he receives a mysterious phone call asking him to come to the aid of a young woman and the code word is...cucumber.

"The Golden Ball": As with George Rowland above, George Dudas is sacked by his uncle for taking an unapproved holiday from work. He's told that he hasn't grasped the "golden ball of opportunity." As he's sitting and contemplating his future, society girl Mary Montresor stops her car in front of him and asks if he'd like to come for a drive. Next thing she's asking if he'd like to marry her and when he says he would, she says: "Well, some day you might." They go for a joyride in the country, playing at picking out the house where they'll live and they wind up held up by the inhabitants of a likely-looking place. Will George grasp the golden ball this time?

"The Rajah's Emerald": James Bond goes on holiday "with" his girlfriend. But rather than the romantic weekend he imagined, Grace goes to stay at a much grander hotel with friends and leaves James to the lodgings that are more within their budget. He's disgruntled and feeling looked down upon...but he has the last laugh when the Rajah's emerald is stolen and he gets to play hero.

"Swan Song": The temperamental opera singer Madame Paula Nazorkoff gives a final performance of Tosca that no one will ever forget...least of all her leading man.

Deaths = 6 (one hit on head; one natural; two poisoned; one fell from height; one stabbed)