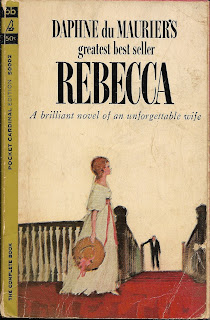 I have gone once more to Manderley. I didn't intend to--but the Book Challenge by Erin bonus round required me to pick a book for the "Reread" prompt that one of my fellow challengers had selected and this was the most appealing of the choices available.* I last joined our nameless second Mrs. de Winter in 2010 (when My Reader's Block was just a baby blog).

I'm not going to do a synopsis or heavy-duty review this time round. I plan to give most of my attention to the last third of the book (which is why I've marked the review "spoiler-ridden). For a less spoilerish review, please click on the linked title above to view my 2010 post.

Read on only if you want to know a MAJOR plot point.

Upon reading for the third time, I found that most of my attention was drawn to the ending. I mentioned in my 2010 review how our nameless (and for the first two-thirds of the book, spineless) narrator was a bit taxing. The older I get, the less patience I have with women in fiction who don't stand up for themselves. I still understand that the narrator didn't feel like she measured up to Rebecca, but I wish she would have found the nerve to tell Mrs. Danvers off a lot sooner. Given how unsure of herself she is throughout and how nervous, I also find it interesting how she doesn't turn a hair when she finds out that Maxim killed his first wife. Suddenly she's all forceful and "don't tell me I don't love you" and "kiss me again!" And she's all about figuring out how to get Maxim out of the awful hole he's in with Rebecca's body being found. If only she'd shown half this gumption early on.

One thing that is dissatisfying to me now is how they've gone abroad and live such a dreary life. The book opens with her describing how they have finally come through their crisis and escaped the devil that rode them. She talks about how peaceful it all is away from Manderley, but it doesn't seem to be much of a life and the peace seems very fragile indeed. Having exactly two slices of bread and butter with their tea...every single day. No cakes, no crumpets, nothing fancy. Reading aloud all the news of the world and sports--but never again to mention the beauties of England which they have left behind without Maxim's face going grey. It's obvious he's still haunted and believes (as he says towards the end) that Rebecca may have won after all. I don't normally condone murder--but Rebecca goaded her husband into it because she wanted a quick death rather than a protracted, painful illness. After allowing her protagonists to escape the trap Rebecca laid for Maxim, you'd think du Maurier could give them a little real peace.

Last line: And the ashes blew toward us with the salt wind from the sea.

*Choosing to do the bonus round which requires that all choices be made from the books others have read makes for an extra challenge for people like me who don't read a great deal of more recently published books.

Deaths = one shot (but presumed drowned throughout 90 % of the book)

This book is one of my favorites, but I've got to re-read it sometime myself. I enjoyed your review this time around!

Oh, one of my favorites - not only the book, but also the film. It is just so notable on so many levels. Reading the Wikipedia article about the novel, I was surprised to find it was used as a code book in World War II. That was news to me. I knew the film version has a different ending, forced by the motion picture code. I have just finished Bells for the Dead by Kathleen Moore Knight (my review) which was written in 1942 and has clear influence from Rebecca. It also has the naive new bride jumping into a spontaneous marriage, and coming home with her spineless husband to her magnificient sight-unseen estate, ruled over by a creepy housekeeper who wants her out. Too bad Manderley burned, it would be a great place to read mysteries by the fire.

Rick, I love the Hitchcock movie. It's really well done (even if the ending did have to be changed a bit to pass the censors). Dame Judith Anderson is terrific as Mrs. Danvers.