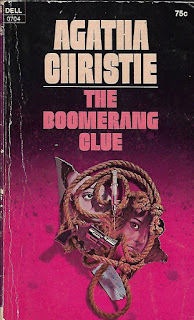 The Boomerang Clue [Why Didn't They Ask Evans?] (1934) by Agatha Christie

Bobby Jones, fourth son of the local vicar, is out for a game of golf with the doctor. A mist is coming up off the sea and Bobby is having his usual erratic luck (mostly landing in bunkers and in the rough) when he smashes a particularly bad shot (it seems to go at right angles) and he hears a cry in the mist. He's afraid he might have hit someone but when he finds his ball there is no one around. His next ball goes right off the edge of the cliff. He looks over the edge for his ball and sees a man's body lying below. They find that he's still alive, but not long for this world. Leaving Bobby with the dying man, the doctor goes for help and while he's gone the man revives just long enough to look straight at Bobby and ask, "Why didn't they ask Evans?"

In deference to the dead, Bobby pulls out the man's handkerchief to place across his face. When he does, a photograph of a beautiful woman comes out as well. He puts it back just before a stranger, Mr. Roger Bassignton-ffrench comes along and asks if he can help. Bobby, remembering that he's promised his father that he'd play the organ at evening service, asks if the man would mind staying with the body until help arrives. He then hares off for church.

The man is identified as a Mr. Pritchard through a photograph in his pocket (presumably the one Bobby saw), but when he attends the inquest as one of the men who found the man he's surprised at how little Pritchard's sister looks like the photograph. Surely a woman wouldn't lose her looks that badly? There follows an odd visit from the Caymans (the sister and her husband) where they want to know if Pritchard regained consciousness and had any last words. Bobby, having forgotten all about the Evans comment says no. But later remembers, writes to the Caymans, and gives them the quote. He immediately receives a letter from an unknown company with an offer of a job in South America--valid only if he leaves immediately. Having already promised his friend Badger that he'd go in with him on a motor garage scheme, he turns it down. He's immediately poisoned with an overdose of morphia and through an exceptionally strong constitution pulls through what should have killed him several times over.

Something is definitely fishy. And that's exactly what his childhood friend, Lady Frances Derwent (Frankie), tells him. After discussing all the events thus far, they decide that Bassington-ffrench is a very shady fellow and Frankie stages an auto accident to worm her way into the household where the man is staying. She and Bobby waver between thinking Bassington-ffrench the villain of the piece and suspecting a rather sinister-acting doctor. What follows is an adventure with a morphia addict, a possibly fraudulent will, an apparent suicide, a second near-fatal episode for both Bobby and Frankie (averted by the last-minute rescue by, of all people, Badger), and a final escape from death thanks to Frankie's intuition. Oh...and we finally find out who Evans is and why they should have been asked.

Christie's stand-alone novels tend more towards adventure and thrills than mystery. These are quite fun novels, but there isn't much choice for culprits and little scope for her devious sleight of hand tricks with red herrings and false clues. It had been a very long time since I read this one (40-ish years, I'd say) but I still enjoyed the antics of Frankie and Bobby. More recently, I had watched the 1980 filmed version with James Warwick and Francesca Annis (more frequently seen as Christie's Tommy & Tuppence Beresford). A delightful adventure that was perfect for a lazy Sunday afternoon. ★★★ and 1/2.

Last line: In an hour's time, the news was all over Marchbolt.

Deaths = 3 (one; poisoned; one shoved off cliff; one shot)

I smiled when I saw the photo of the book, it's the same edition I bought when I was twelve or thirteen (although it looks to be in much better condition than my old copy:). I agree (with the benefit of hindsight) that the plot is a bit simple, but that certainly didn't matter me back then. This book is an absolute corker, and I remember speeding through it and then going back to reread my favorite parts because I was sorry it was over so quickly. I really should reread it one of these days. (And I was unaware of the adaption. I'll definitely give it a watch.)